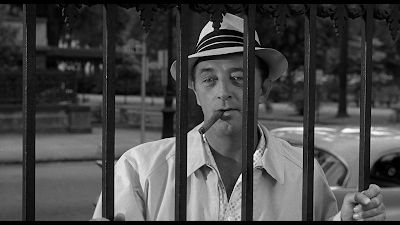 When the 1991 version of Cape Fear showed up in the mail from NetFlix, I knew I had the rare opportunity for a perfect double feature. It was only appropriate to begin with the 1962 version of Cape Fear. Sure, it meant that I’d be spending about four hours watching the same basic story twice, but no matter. After all, the NetFlix movie needs to go back, but it only makes sense to see the original before the remake. It would be an interesting opportunity to directly compare and contrast the two films with both fresh in my memory.

The original Cape Fear was evidently a bust in terms of box office, which makes it an interesting choice for a remake. Evidently, it failed so badly that it spelled the end for Gregory Peck’s production company. Since that time, though, it has become something of a classic. It’s an interesting film in the sense that it features the work of high-profile stars Gregory Peck and Robert Mitchum, but is essentially a B-movie. I guess that makes it a B-movie with A-list aspirations.

Sam Bowden (Gregory Peck) is a lawyer who is accosted one day by a man named Max Cady (Robert Mitchum). Sam doesn’t realize this, but he and Max have a history. It turns out that Max Cady was just released from prison, and it was Sam who put him there. Sam witnessed Cady attacking a woman and it was his testimony that put him there. Now that he’s out, he’s decided to move to Sam’s hometown. It’s evident that Cady’s arrival is specifically to go after Sam and his family, but there’s nothing specific that he can be charged with.

But he’s definitely a threat, emphasized when the Bowden family dog is poisoned. Cady seems to simply appear wherever the Bowdens are. Sam levels with his wife Peggy (Polly Bergen) and daughter Nancy (Lori Martin). He also seeks help from Mark Dutton (Martin Balsam), the local chief of police. But Cady is far too smart for everyone. He’s got a local residence and has money in the bank, meaning he can’t even be busted on a vagrancy charge.

Eventually, Sam hires a private detective named Charlie Sievers (Telly Savalas…with hair!) and they catch a break. Cady violently attacks a woman named Diane Taylor (Barrie Chase). However, knowing what will happen to her on the stand and knowing that the news will eventually spread to her hometown, she refuses to press charges and instead flees the area. Desperate, Sam hires a group of thugs to beat up Cady, but he manages to fight them off. In fact, he hires a lawyer of his own and starts proceedings to have Sam disbarred for his part in the attack.

With no other options available to him, Sam takes his family to their houseboat on Cape Fear. Naturally, Max Cady follows, leading to a final confrontation between Cady and the Bowden family.

Cape Fear works for a number of reasons. First is that it is, at its heart, a melodrama. Until he hires goons to put the beatdown on Max Cady, Sam Bowden is as pure as the driven snow. He’s a good lawyer, capable and possessed of integrity. His marriage is a good one and his daughter is a fairly typical young teen in most respects. Max Cady is purely evil and malicious. There’s nothing likeable about him. We’re supposed to hate him and fear him. And so we do, and it makes every interaction between him and any of the Bowdens unpleasant at best and terrifying in many cases.

The performances are generally good, although it’s absolutely Robert Mitchum who steals the show here. He’s intended in many ways to be the most compelling character in the film because he is so purely evil and vindictive. Mitchum always played great psychopaths. This portrayal is a match for his role in Night of the Hunter in terms of overall menace.

Ultimately, the biggest problem with Cape Fear is the ending. It ends too abruptly, and the ending we get is unsatisfying, mostly because of the Hays Code’s requirements. Having seen it, I get why a remake was made, if only to fix an ending that really feels like it’s a letdown. Still, it’s worth a watch. 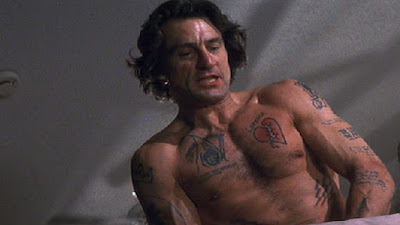 So what about Martin Scorsese’s remake? The basic story here is the same, but with some significant differences. This time, lawyer Sam Bowden (Nick Nolte) did not testify against Max Cady (Robert De Niro). Instead, he was Cady’s lawyer, but he hid specific pieces of evidence that might have cleared Cady because of the violence of his crime. Now, Cady is looking for payback in essentially the same way.

This time, though, there are even bigger differences than the implied shiftiness in Sam Bowden’s past. In the remake, Cady’s violent attack is on Lori Davis (Illeana Douglas), a clerk who works with Sam and who might be having an affair with him (it’s never really made clear although it’s hinted at several times). What’s not hinted at is problems between Sam Bowden and his wife Leigh (Jessica Lange). Additionally, daughter Danielle (Juliette Lewis) is a little bit older and a lot more preocious. She’s been busted for marijuana use, and there’s a good amount of evidence of sexual precocity (more on that in a bit).

The private detective this time is named Claude Kersek (Joe Don Baker) and is complicit in hiring the thugs to go after Max Cady. Cady is a lot more aggressive in this version of the story as well. In an interesting nod to the original version, Robert Mitchum appears as a police lieutenant, Gregory Peck plays Cady’s lawyer, and Martin Balsam plays the judge who grants Cady a restraining order after the attack.

The changes here really damage the overall story. Sam Bowden is a much more difficult person to sympathize with in this version. We know he’s a potentially crooked lawyer even if he poor defense of Max Cady was done for the right reasons. We know from conversation that he’s been a serial adulterer. This makes it more difficult for us to see him as being completely innocent here and not getting something that he’s earned, even a little bit.

A bigger problem is the rewrite on the daughter. When Nancy is threatened in the original, it’s scary because Nancy is a true innocent. In the remake, Danielle seems to welcome Cady’s explicitly sexual advances on their first meeting. She’s no longer an innocent, and there’s a real sense that she knows more of what she’s getting into here and heads into trouble with her eyes open.

The saving grace here is De Niro. His version of Max Cady, covered in Biblical scriptures and animalistic is truly threatening. We see his ability to cause damage and to hurt people purely for the pleasure of doing it. De Niro is not channeling Travis Bickle here, although that’s an easy place to take this. No, this is a completely new creation, and it’s the main thing that makes the remake of Cape Fear work.

I’m disappointed in the remake. By changing the story, the entire reason for the strength of the original film is destroyed.

Why to watch Cape Fear (1962): No one played a psycho like Robert Mitchum.
Why not to watch: An unsatisfying conclusion.

Why to watch Cape Fear (1991): No one plays a psycho like De Niro, either.
Why not to watch: While the ending is better, it loses a lot of what makes the original work.