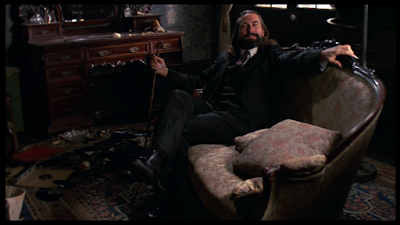 By the time it wraps up, Angel Heart has gone through almost a half dozen gruesome and grisly murders and has moved from New York to New Orleans. But the film could have essentially been a short feature. We as the audience jump through a lot of hoops and have to keep a lot of plates spinning to get to the final sequence that finally reveals what many of us will deduce from previous scenes. Ultimately, we realize that a great deal of the film could have been handled by extending an early scene instead. Because of this, Angel Heart is about the journey rather than the destination.

Downtrodden private investigator Harold Angel (Mickey Rourke, back when he still had his own face) is contacted by a lawyer named Winesap (Dann Florek) to meet with a client. This client, Louis Cyphre (Robert De Niro) is an imposing gentleman with a full beard, immaculate black suit, and long, pointed fingernails that intentionally look like claws. Cyphre tells Harry Angel that a singer who was starting to make a name for himself a dozen years previous during World War II has backed out on his contract. He wants Angel to track the man down.

The story is that the missing man, Johnny Favorite, suffered severe neurological damage during the war and has been holed up in a hospital for years. Angel goes to investigate and finds that the man was transferred out of the hospital almost as soon as he arrived. Despite the story of neurological damage, Johnny Favorite walked out with some extensive facial reconstruction surgery and vanished. Angel tracks down the doctor responsible (Michael Higgins) to get the full story. Since the doctor is a morphine addict, Angel leaves him to dry out a little, but when he returns, the doctor is dead in an apparent suicide.

Following a few more leads, Angel discovers that some people who played with Johnny Favorite are still around in New Orleans. Additionally, a woman who used to read tarot cards and tell fortunes in the city has gone down to New Orleans as well. Angel tracks down these people as well, and after talking to the fortune teller, Margaret Krusemark (Charlotte Rampling) and the blues man Toots Sweet (Brownie McGhee), both of them turn up dead and horribly mutilated.

Eventually, Harry Angel turns up Epiphany Proudfoot (Lisa Bonet), who claims to be the daughter of Johnny Favorite. Epiphany is connected to the late Toots Sweet by being a part of his Voodoo sect. And things simply get weirder from here. It turns out that Johnny Favorite made a pact with the devil (hence the name “Louis Cyphre”), who is searching for the man to finally claim his soul. And Harry Angel has been thrust into the middle of what increasingly appears to be a battle not just on Earth, but in the supernatural realm as well.

It’s nice to remember that once upon a time Mickey Rourke actually had a pretty good career, even in films like this one where it feels like he’s trying to channel Bruce Willis. Rourke has always had some acting chops when he was given the chance to use them, and he’s pretty good here. It’s De Niro who steals the film in every scene he’s in, though. He plays an interesting version of the devil. Aside from a single moment of glowing yellow eyes, he’s actually kind of effete. This doesn’t prevent him from bringing a particular menace to the screen, but he’s almost genteel in the way he does it.

When Angel Heart was released, I remember it being thought of as Lisa Bonet graduating from her Cosby Show role into more adult roles. It certainly has that feel to it. She’s not in a lot of scenes, but she makes the most of the scenes she’s in.

While there’s a moment of realization that come at the end—the realization that all of this could have been handled without the messy deaths and investigation—there is also the realization that doing it that way would make this entirely unsatisfying. We need to follow the journey to understand exactly what we’re going to. It’s the only way to invest us emotionally in the story being told.

Angel Heart turns out to be a pretty interesting film. It has the added bonus of reminding the world that once upon a time, Mickey Rourke was considered one of the best-looking men in Hollywood for a reason.

Why to watch Angel Heart: De Niro’s fingernails.
Why not to watch: Goes a long way for what turns out to be a short journey.

Posted by SJHoneywell at 7:32 PM