All the World's a Bar

Film: Only When I Laugh
Format: Turner Classic Movies on rockin’ flatscreen. 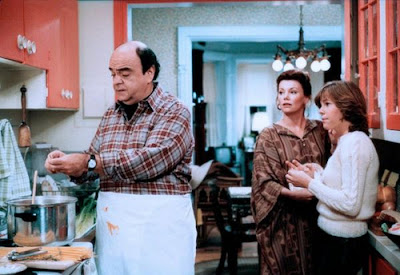 The clearing of my DVR backlog continues today with Only When I Laugh, a film I’ve had recorded for some time and just haven’t gotten to. This is a film based on a Neil Simon play. I have a mixed reaction to Simon’s work; sometimes I really like him and sometimes I find it far too clever to be believable. It’s also a film that stars Marsha Mason, and I don’t find that I like her much at all. I’ve more or less dreaded this one, but figured that I might as well knock it out. I had originally planned a double feature today with another Neil Simon movie starring Marsha Mason. That I only got through this one should indicate a lot.

Only When I Laugh does manage to jump on a couple of my nerves when it comes to Neil Simon’s work. Part of this is, well, Marsha Mason, who I’ve determined that I pretty much don’t like. I don’t know if it’s her or if it’s specifically her in Neil Simon’s work. In any case, I’ve seen her in a couple of movies (both penned by Simon) and I like her in exactly neither of them. So there’s a major strike.

The second strike is that this is one of those stories that is all about people involved in the theater, which makes it really self-referential. For the theater crowd, it’s probably something that feels natural and even welcome, but I’m not a fan of the theater or theater people in general. More to the point, these are down-on-their-luck theater people who complain about their lives, tell each other how wonderful they are, and are somehow still perky and manage to live in decent apartments in New York. It’s like The Goodbye Girl mutated and spawned a dark child.

Dark? Yes. Only When I Laugh is not the Neil Simon laugh-fest tinged with drama that seem to be his frequent stock in trade. Instead, this is a drama tinged with one-liners from the cast. Actress Georgia Hines (Marsha Mason) has just ended a stint in alcohol detox and is picked up by her former actress friend Toby (Joan Hackett, who managed a Supporting Actress nomination). Georgia returns home to be greeted by her gay down-and-out-but-perky actor friend Jimmy (James Coco, nominated for Supporting Actor). Georgia vows to stay sober this time and find work as an actress again. This is immediately complicated by the sudden presence of her daughter Polly (Kristy McNichol), who would like to spend time with the mother she has barely known her whole life.

There are three major plot points that follow. The first is that Jimmy finally gets a role in a play but is fired from it three days before it opens. The second is that on her birthday, Toby’s marriage falls apart and her husband asks for a divorce—shattering for a woman who has prided herself entirely on her looks and desirability her entire life. Third, and central to the story, is that Georgia’s former lover David (David Dukes) has written a play about their life together and her alcoholism and wants her to star in it. She takes the job, but falls to pieces when Toby’s marriage and Jimmy’s firing take place on the same day. She starts drinking again and embarrasses herself in front of Polly, who had really hoped to begin a relationship with a sober mother.

Almost in spite of itself, there’s a lot good going on in Only When I Laugh. For as painful and unbelievable as the snappy dialogue is for most of this, the last half hour is actually pretty compelling when the world crashes in on Georgia and she starts hitting the bottle almost as an automatic response to the problems going on around her. Joan Hackett earned her nomination for a moment that happens in the last 20 minutes of the film, a speech so biting and beautifully delivered that it almost makes the first part of the film worth seeing. It’s also nice to see Kristy McNichol more than handling her own with an experienced cast. In fact, she’s one of the best things in the film.

I feel like I should bring up James Coco as well. In what is certainly one of the most interesting two-fers in film history, Coco was nominated for an Oscar for this performance and simultaneously nominated for a Razzie for the same role. Honestly, I can see both. I don’t mind him in this, but I can see him being annoying immediately. I think in a large sense that Coco earned the Oscar nomination and the role earned the Razzie nomination.

So what do I think? It’s not bad, but I still don’t like Marsha Mason. The third act is what rescues this from being something that irritates me completely, but it takes too long to get to the stuff that really seems to matter.

Why to watch Only When I Laugh: It ends well.
Why not to watch: Marsha Mason is like biting on tin foil.

Email ThisBlogThis!Share to TwitterShare to FacebookShare to Pinterest
Labels: Best Actress, comedy, drama, Glenn Jordan, Only When I Laugh