Film: The Lion in Winter
Format: DVD from personal collection on laptop. 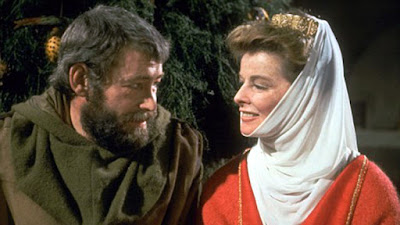 I’ve had a copy of The Lion in Winter sitting on my shelf for a couple of years but I haven’t gotten around to it until tonight. I knew nothing about the story going in. In fact, all I knew was that it was a period piece taking place close to a millennium ago and that it was nominated for a metric ton of Oscars. I didn’t know that it was based on a play, that at least some of the history of it is accurate (although the details are entirely fictional). It’s also worth noting that I thought I had seen some really hateful families before, but none like the people we meet here. The Lion in Winter almost certainly had some impact on Game of Thrones. At the very least, there’s a lot of similarity in the way the characters interact.

More or less this is a sort of prequel to the story of Robin Hood. What that means is that we’re dealing with the father of Richard the Lionheart and both Richard and John play a significant role in the story. The Lion in Winter is about the various maneuverings for the throne. There are three sons vying for the throne, the king himself attempting to keep his kingdom together and work out a proper succession, an angry young king of France, a woman who holds the key to several territories, and the queen, who spends most of her life imprisoned and is as conniving as everyone else in the story.

And now that I’ve seen it, I think I can say that I have never seen a film more filled with unveiled hatred. I don’t say this as a complaint or an insult, but as a statement of fact. The Lion in Winter is a film of high emotions, and almost all of those emotions are pure hatred and loathing.

So what do we have here? Henry II (a nominated Peter O’Toole) has imprisoned his queen Eleanor (a nominated Katherine Hepburn). In her place he has Alais (Jane Merrow), who is intended to be married to one of his sons. In fact, Henry has been given title to some lands on the condition that Alais be married to his heir. The wait has been a long one, since Henry has essentially taken Alais as something like a concubine.

Vying for the throne are the three surviving sons. Richard (Anthony Hopkins) is warlike and also Eleanor’s favorite. His claim is probably the best as the oldest. The middle son is Geoffrey (John Castle) is essentially forgotten, disliked by both of his parents, but useful for his ability to plot and scheme with the best. Youngest son John (Nigel Terry) has the look of an oaf, but is Henry’s favorite and has been promised by Henry to be his heir.

All of these disparate personalities come together on Christmas, 1183 to determine the fate of the kingdom. Having reached the age of 50, Henry is starting to feel his age. He does not want to give up Alais, but is now being threatened by Phillip of France (a very young Timothy Dalton) to either give back Alais’s dowry or have her married off. Richard, Geoffrey, and John plot with and against each other for the rights of succession. Eleanor and Henry plot with and against each other. Phillip plots with everyone as well.

What’s unusual here is how open everyone is about what they think and what they are doing. There is very little hidden in terms of raw emotion. People are naked in their mutual hatred and disgust of each other. It’s like everyone is playing poker with their cards showing at all times, everyone convinced that despite the open emotion, that their various plots will work. Every conversation is one of pain and misery, seeking not simply for a particular advantage but to wound everyone else around them as much as possible. To further the poker analogy, everyone is holding a crap hand. Power shifts moment by moment, with the upper hand in any situation lasting no more than a few moments.

In a lot of ways, The Lion in Winter is one of the most hateful films I have ever seen. This is not a pleasant experience in any respect because of the constant, naked aggression and unresolved hatred between pretty much any two characters. And yet, it’s also a masterpiece in many ways because of this. The script is pure poetry. I’m surprised that the film isn’t one that’s better known simply because of how damn quotable the thing is. Every couple of minutes someone says something that feels like it should be remembered as one of the great quotes of cinematic history.

And then, of course, there are the performances. Everyone here is worth watching. This was Hepburn’s 11th nomination and her third win, and it’s worth saying that she lost none of her power from her glory days of the ‘30s and ‘40s. Hepburn is magnetic here in every scene, and every word she says is worth hearing. It was O’Toole’s third nomination, and while I haven’t seen all of his nominated performances, I think this was his best chance for a win including his brilliant performance in Lawrence of Arabia. He rants, raves, shouts and screams, but never comes across as overacting. It’s an extreme performance, but also completely natural.

I do not feel strange at all saying that this is a film that demands to be watched. The hatefulness of the entire list of characters is far transcended by just how brilliant this is. I can think of no way that it could be made better or performed more perfectly.

Why to watch The Lion in Winter: The script is pure poetry.
Why not to watch: Everyone is hateful.