I'm Not Crying, You're Crying 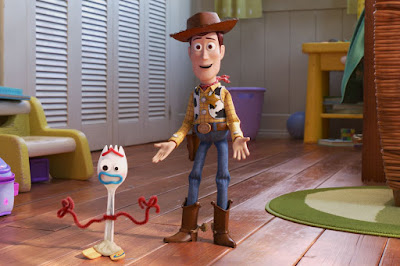 Fucking Pixar. As a film company, they’ve finally had a few missteps and films that haven’t really attracted much acclaim, but when they are good, there’s no studio better. I was initially very worried when I heard that a Toy Story 4 was in the works. They’d ended the trilogy well, getting the toys through to Andy going off to college and passing them on to a new child. There was nowhere the story needed to go, and tacking on a fourth film honestly felt like it was going to be a cash grab. But I’ll be damned if they didn’t make this work, produce a tremendously good story with some genuine laughs, and get to an ending that makes sense and, hopefully, legitimately ends the series on a very high note.

You should know the basics here. Cowboy doll Woody (Tom Hanks) and spaceman doll Buzz Lightyear (Tim Allen) now belong to young Bonnie (Madeleine McGraw). This is a difficult transition for Woody, who for years was Andy’s favorite toy. Now, he is frequently left in the closet, his sheriff’s badge being placed on cowgirl Jesse (Joan Cusack). Woody is feeling ignored, since all of the other toys are getting played with. When Bonnie goes off to kindergarten orientation, Woody sneaks inside her backpack.

At kindergarten, Bonnie is feeling alone and lonely, and during craft time, with some unseen assistance from Woody, she makes a toy out of a tongue depressor, pipe cleaners, googly eyes, and a spork. She names the new creation Forky (who will be voiced by Tony Hale) and takes him home. Forky, now considered a toy, comes to life in the backpack, and since he was made from trash, is convinced that he is trash. It’s now Woody’s sworn duty (he thinks) to prevent Forky from throwing himself away. The next day, the family goes on a road trip, and Woody continues his vigil of protecting Forky from himself, but when Forky manages to get away and jump out of the RV, Woody follows.

As they walk back to where the family is staying, Woody convinces Forky that Bonnie needs him. But before they get back, Woody spots a lamp in a secondhand story that reminds him of his long-lost love Bo Peep (Annie Potts). Exploring the store, he discovers Gabby Gabby (Christina Hendricks), a talking doll with a broken speaker, who decides that she wants Woody’s speaker, and will use her army of ventriloquist dummies to get it. In fact, she kidnaps Forky to force the issue. Woody ends up in a park with “lost” toys. It is here that he really does reunite with Bo Peep, and also meets tiny toy cop Giggles McDimples (Ally Maki), and eventually Ducky and Bunny (Keegan-Michael Key and Jordan Peele), and Canadian stuntman toy Duke Caboom (Keanu Reeves). The plot then spins around rescuing Forky.

There’s a hell of a lot more here. Toy Story 4 is surprisingly dense with story elements, and many of the characters don’t get a great deal of screen time. Classic Toy Story characters like Slinky Dog (now voiced by Blake Clark), Rex (Wallace Shawn), Hamm (John Ratzenberger), and the rest are generally limited to a few lines. New voices include June Squibb as the secondhand store owner and Carl Weathers as a trio of soldier toys called Combat Carl. Even Buzz Lightyear feels very much like a supporting character in this. Toy Story 4 is Woody’s film in large part, and after the first act, it’s as much about the relationship between Woody and Bo as it is about rescuing Forky.

What Toy Story 4 does very well is make Bo Peep a real and vital character. She was more or less Woody’s love interest in the first two films and was gone for the third film. Bo was at best a secondary character and an interesting choice as Woody’s girlfriend, a relationship that clearly continued with the arrival of Jesse and her evidently pairing up with Buzz. Here, it is Bo who comes up with the plans to rescue Forky, and it is Bo who has so clearly and happily adapted to life as a “lost” toy played with by whatever kids find her at the park where she now lives. Bo fixes broken toys and has so fully embraced her life in the seven years since she has lived on her own that going back to being the toy of a single child holds no interest for her anymore.

When I say that Bo is now a vital character, I mean that in every way. She is moved so much to the forefront of this film that if there ever is a Toy Story 5, it wouldn’t work without her front and center in the mix. It’s a fun change, seeing a toy that was more or less on the sidelines become capable, smart, and dependable.

What really gets me, though, is that Toy Story 4 has multiple moments in the third act that are legitimately emotional and they all work. The resolution of Forky, of Gabby Gabby, and of Woody, Bo Peep, Buzz, and Bonnie are all moving and genuine. For whatever reason, we care about these damn toys like they are real people, because they act and live and care like real people.

Everything in this film works. It belong with the other Toy Story films. All of the new additions, especially Ducky and Bunny and Duke Caboom absolutely belong in the pantheon.

It’s possible that a fifth film could be cobbled together, but I hope they stop with this one. The story has been legitimately told, and there’s not a lot more that needs to be said with these characters. Please, Pixar, leave it here. End this on this high of a note.

Why to watch Toy Story 4: Pixar hasn’t missed on a Toy Story yet.
Why not to watch: Your heart is made of stone.