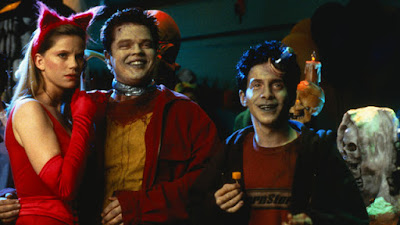 Horror comedies are evidently really hard to make. I say this because so few of them are any good. The vast majority of them appear to be comedy first, horror second. This works out to the detriment of both the comedy and horror elements. Oh, sure, there are some really good ones out there (Tremors, Slither, Shaun of the Dead and any number of others), but most of them aren’t funny and even fewer are actually scary. Idle Hands manages a few laughs and no scares, so I guess in that respect it’s slightly ahead of the curve.

There’s a surprising amount of plot for such a nothing of a movie. At least there are a lot of plot elements with which I need to contend. Anton Tobias (Devon Sawa) is a high school burnout who wants nothing more from life than to sit on the couch, watch television, and smoke a huge amount of pot. This is a philosophy shared with and endorsed by his two friends Mick (Seth Green) and Pnub (Elden Henson). Despite his constant television watching, Anton is unaware of a killing spree going on in his town that has recently included his parents. This is despite the fact that Anton himself is responsible.

See, Anton’s right hand has become possessed. We learn eventually through the appearance of a druidic priestess named Debi LeCure (Vivica A. Fox) that there is some demonic entity that possesses the laziest slacker it can find to commit a bunch of murders and drag souls off to hell. And now Anton is the latest host. This is going to cause him to kill both Mick and Pnub, who are going to decide that they don’t feel like going down the tunnel of light and will instead reanimate their own corpses.

The core problem with a movie like Idle Hands is not the premise of someone’s hand becoming possessed. I mean, in a very real sense, this movie is simply the hand possession scene from Evil Dead II played out over 90 or so minutes. This is almost literally true since Anton does, in fact, cut his hand off and then fight against his animated appendage for a good portion of the film.

The fact that this is in some ways a remake of a vastly superior film is not the problem here. It’s that because Idle Hands is so interested in being funny before it is scary, it attempts to jumpstart the comedy. It does this by making everyone in the movie incredibly stupid. It also makes most of them unlikable, but before we get there, they’re really stupid.

How stupid? Well, Anton, it turns out, has had a crush for years on his neighbor Molly (Jessica Alba). He finds a reason to talk to her, and, because his hand is possessed, he’s a lot more forward with her than would be acceptable anywhere. And, of course, she likes it. He’s still concerned about trying to get into Molly’s pants despite the fact that he’s killed his friends who are now walking around as corpses and despite the fact that his possessed hand is running around still killing people.

This is not limited to Anton. When Debi LeCure shows up, Anton’s neighbor Randy (Jack Noseworthy) immediately makes a play for her and is so unbelievably, smarmily sexist that he should earn multiple punches in the face. Instead, he’s eventually rewarded with sex. This is a movie that hates women in a very real way, although not nearly as much as it seems to think that references to pot smoking are the height of comedy.

Idle Hands is everything that’s wrong with ‘80s and ‘90s teen sex comedies, everything wrong with bad horror movies, and everything wrong with Cheech and Chong films rolled into one stupid package. In fact, the only thing I like about it is that Seth Green and Elden Henson are funny. Oh, they’re stupid and sexist and equally too hung up on pot jokes, but the performances are winking at the audience in the best way possible. Other than them, though, there’s nothing here that’s good for anything.

Why to watch Idle Hands: Seth Green and Elden Henson.
Why not to watch: It’s powerfully stupid.