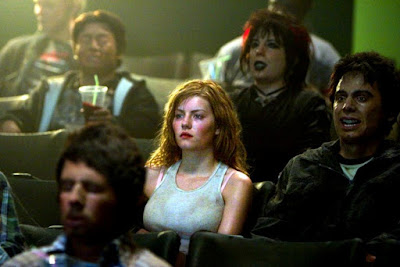 There are horror remakes and there are horror remakes. The Mystery of the Wax Museum was given a very straight, standard remake in the 1950s starring Vincent Price, with the name changed to House of Wax. It was a lot of fun, adding in goofy 3D effects and playing up the camp. Someone had the bright idea to make a film with the same name, but with nothing beyond the presence of a wax museum in common with the original story. That’s a problem, because the original story was fun, and this version stinks on ice.

The House of Wax remake comes from 2005, right in the middle of a collection of horror movies that decided gore and torture was a good substitute for old-fashioned horror. What this means is that we’ll be focusing a great deal on gore here, using that to generate disgust more than it generates real fear. This is a gross-out movie wearing the clothing of classic horror.

So, rather than being transported back to an earlier time with Victorian damsels in distress being menaced by a disfigured waxsmith obsessed with creating the perfect Marie Antoinette, we have a group of six college-aged assholes on their way to a football game in the wilds of Louisiana. At night, they pitch camp, despite the area having a truly foul smell coming from somewhere nearby. One encounter with a mysterious truck later, and we eventually discover that the stink comes from a charnel pit of road kill.

As the asshole gang gets ready to leave for the football game, Wade (Jared Padalecki) discovers that the fan belt on his car is broken. He and his girlfriend Carly (Elisha Cuthbert) decide to stay in the area to get the fan belt fixed. The only local they’ve seen (Damon Herriman) offers to take them to the closest town to get the belt fixed. The other four, including Carly’s delinquent twin brother Nick (Chad Michael Murray) go off to the game, but eventually turn back around because of traffic.

Because this is a gross-out movie, the local town is going to be a lot closer to something out of The Texas Chainsaw Massacre than anything else. Eventually, we’re going to find out that the town is essentially abandoned, save for the people who are “maintaining” the wax museum. Like the original films, the museum is being sustained not by the art of wax sculpture, but by killing people and covering them in wax.

Like all movies like this, the group of protagonists is going to be slowly picked off. Since I haven’t mentioned the other three of these people, one of whom is played by Paris Hilton, you can probably guess their fates. In truth, one of the selling points of this film is that Paris Hilton gets brutally killed. This is not a spoiler. House of Wax isn’t original enough to walk away completely from the final girl trope, and it’s a pretty damn good bet that Paris isn’t going to be our final girl here.

House of Wax is desperate to connect as much as it possibly can with the original films by any means necessary. So, there’s a wax museum despite the town being abandoned. We’ve also got the significant plot point of the wax statues being actual people covered in wax rather than real wax sculptures. And, for no real reason other than it was a part of the original and first remake, our wax sculptor is disfigured. He’s also mute, which may be a sop to the Charles Bronson role in the first remake. Regardless of this, House of Wax gets rid of all of the elements of the other two films that made them so much fun. Rather than being about the sort of funhouse scares of the classic versions, this is directly about grossing out the audience. Rather than giving us Victorian protagonists who are almost too innocent to be believed, we’re given over-sexed assholes who aren’t worth caring about.

That’s a shame, because there is clearly a movie that could be made from these basic story elements. Since the film makers here decided instead to go for the cheapest scares they could. It’s poor filmmaking because it’s lazy filmmaking, the sort of thing that anyone could do. There’s nothing here that couldn’t have been made by a couple of dozen other people, and so there’s not a hell of a lot here that’s worth seeing.

Why to watch House of Wax (2005): Vincent’s wax mask looks a lot like Tommy Wiseau.
Why not to watch: It’s pretty much shit.