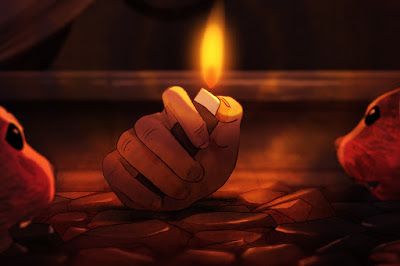 It seems that in a futile effort to watch as much as possible before the surprisingly early Oscars ceremony this year, I’ve decided to focus almost entirely on the Best Animated Feature category. At least that’s where my reviews have been for the new additions. I Lost My Body is the oddball entry into the category. There’s often one film that is either substantially unusual in some way or that is clearly not made for children. Traditionally, this is the “Oscar is really stretching out to reveal exciting and interesting film” nomination, and it’s one that has no chance of winning.

So what can I say about this film? It’s certainly unusual, and it’s one of those movies that has a long and storied path of getting made. It spent a good seven years in development, only to be released, nominated for an Oscar, and immediately picked up by NetFlix.

The high concept elevator pitch here is that a disembodied hand is granted with some level of sentience and self-awareness as well as the ability to move on its own (a la Thing from The Addams Family), and spends the bulk of the film attempting to reunite itself with its body. The film is told essentially in two halves—we have the journey of the hand trying to find the rest of its body and we have the flashbacks of the life of Naoufel (Hakim Faris in the French, Dev Patel in the English) and how he got to the point of losing his hand.

At first blush, it seems like Naoufel is the main character of the film, but the name of the film is important. It’s I Lost My Body, not I Lost My Hand. In that respect, the quest of the hand—escaping from a medical facility, dealing with subways, hungry rats, pigeons, foot traffic, and more—is the central story while the flashbacks are the background. That’s probably a good thing, because in a lot of respects, the background story is really ugly.

Naoufel, we learn, is an orphan. His parents were killed in an accident that he survived. He eventually went to live with neglectful and possibly abusive relatives. He’s done very little with his life, and spends his time delivering pizzas (and doing it poorly) for a local pizza place. His life changes when he has a small accident, ends up delivering a pizza very late to a woman (Victoire Du Bois/Alia Shawkat) who doesn’t open the door for him, but spends a long time talking to him.

Naoufel immediately becomes obsessed with the woman, who we learn is named Gabrielle. Obsessed to the point where he tracks down where she works and tries to meet her there and eventually tails her to the home of a relative. As it turns out, she lives with her grandfather (Patrick d’Assumcao/George Wendt), who is a terminally-ill carpenter. On the spur of the moment, Naoufel decides to become his apprentice, move into the house, and start learning how to work with wood. If you wondered how a pizza delivery guy loses a hand, well, now he’s a guy who spends a lot of time around power tools.

All of this would be interesting in the sense of creating a world where people change lives based on random encounters and the like, but it becomes really upsetting. Naoufel’s continued pursuit of Gabrielle doesn’t simply border on the stalkerish, but jumps over the line and runs as far as it can. What he evidently thinks is supposed to be romantic gestures—especially when he finally reveals his identity—are the kind of things that women have nightmares about and that earn restraining orders. This is not sweet or romantic in anything other than a movie world. In the real world, he’s a step or two away from stealing her underwear and watching her apartment with high-powered binoculars.

And that’s the thing. While the title gives us the idea that the hand is the main character, the hand’s journey is pretty straightforward. It encounters obstacles and deals with them. It is resourceful at times and even cruel or merciless in its quest to return to its former body, but it’s just a series of hurdles that the hand completes. Naoufel’s story is a human one and is supposed to be compelling, but is actually disturbing and creepy.

A lot of people have dripped a lot of praise onto I Lost My Body, and they’re going to continue to do so. Pull back the curtain on it a bit, and there’s a lot of rot there.

Why to watch I Lost My Body: Everyone tells you that you should.
Why not to watch: It hides some really ugly behavior behind the story.