One is Too Many 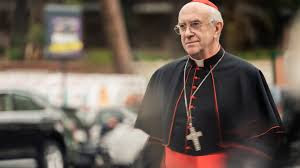 Say what you will about NetFlix, but the company is aggressively going after talent. At least two of the Best Picture nominees from the recent Oscars were NetFlix movies (Marriage Story and The Irishman), and they are absolutely seeking top talent both in terms of actors and directors. The Two Popes was directed by Fernando Meirelles, the director who also made City of God. For the average person, that might not mean a great deal but for even casual movie fans, that’s a quality pick up.

The Two Popes is not some wacky alternate universe where there are two guys living in the Vatican sharing duties (although that would have been fun), nor is it a clash between the guy in the Vatican and the Coptic patriarch in Egypt excommunicating each other (although that would have been entertaining). No, this is the much more prosaic story of Pope Benedict XVI and Pope Francis. We go more or less from the death of John Paul II through to the abdication of Pope Benadryl and the election of Pope Frank. If it seems that I’m being glib, well…I am.

But really, the movie is essentially about this relationship, and it does delve a bit into the controversies that have followed both of these men. What we learn at the start is that Francis, known at the time as Cardinal Jorge Bergoglio (Jonathan Pryce) earned the second highest number of votes in the process that eventually turned Cardinal Ratzinger into Pope Benedict (Anthony Hopkins). We also learn that the two of them represented opposite ends of Catholic thought. Ratzinger was seen more as a continuation of JPII’s policies, a sort of return to dogma Catholic, while Bergoglio was much more liberal. The two do not get along because of this.

Fast forward a few years and Bergoglio has decided that he wants to retire. To do so, though, he needs to get permission from Benedict, and he arranges a trip to the Vatican to more or less present his letter of resignation. As it happens, he was summoned to the Vatican anyway; Ratzinger is thinking of resigning the papacy and more or less wants Bergoglio to be the one who bears this secret for him. He also refuses Bergoglio’s resignation since it would initially look like dissatisfaction with the Pope’s acts.

One of the real points of the movie, though, was to show a growing sort of respect between the two men. They still essentially disagree with each other on everything, but they learn that the positions of the other are held for reasons other than simplicity or convenience—they genuinely take serious positions on deep theological issues. And, of course, eventually Benedict does resign the papacy and soon thereafter Bergoglio is elected, immediately shunning the habit for much more simple clothing.

There are some very interesting choices here. I have to wonder who thought it would be a good idea to have Anthony Hopkins play Pope Benedict as either deficient mentally or clueless of all culture. It is literally as if he believes Ratzinger suffered from some slow-paced dementia that only affects very specific things. It’s an odd choice.

Hopkins, however, is very good in this role. This is not much of a surprise since he is generally an engaging presence and is likable on screen. But this is Pryce’s movie, dealing with the struggles of Cardinal Bergoglio and his eventual election to the papacy despite his past, which included his silence during a military takeover in his native Argentina. It also touches on the scandals and issues that forced Ratzinger out, making him the first pontiff to resign from the position in something like seven centuries.

I didn’t hate this movie, but I didn’t love it either. I will admit that I’m not sure everyone in the world deserves a redemptive arc, a statement that certainly applies to the guy who helped cover up the systematic sexual abuse of thousands of children in the church. It’s probably better to say that I appreciate the fact that this was nominated for its screenplay and for Pryce and Hopkins in lead and supporting roles respectively, but not for Best Picture.

The truth is that this is a slow movie. It’s a character study, more or less, and an attempt to provide something between a warts-and-all story and a hagiography of these two men. In truth, when I think of Benedict, I tend to think of Tim Minchin’s Pope song. When I think of Francis, I’m reminded of a comment from the late Christopher Hitchens, who said something along the lines of not wishing ill on anyone, but realizing that when the pope dies there is a brief period of time when no one on the planet claims divine right to say that he is perfect.

It’s worth watching for Hopkins and Pryce, as well as for Juan Minujin, who plays the younger version of Bergoglio in the flashback sequences.

Why to watch The Two Popes: Pryce and Hopkins are great.
Why not to watch: It plays a lot like Catholic propaganda.