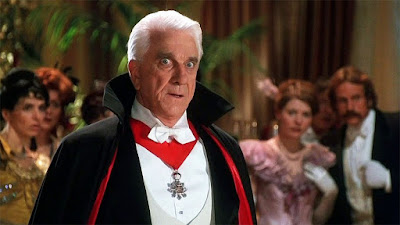 How exactly does this happen? There was a time when Mel Brooks was the best and most fearless satirist and comedian in Hollywood. This is a guy who did both Young Frankenstein and Blazing Saddles in the same year. This was a guy whose first movie as a writer and director won an Oscar for its screenplay. And the last movie he ever directed was Dracula: Dead and Loving It, which is like Stanley Kubrick ending his career with The Room.

This is going to be a relatively short review because it’s goddamn depressing. Brooks was once incredibly edgy. Blazing Saddles--still funny after 45 years—was incredibly edgy in 1974. Characters said things that were dangerous in that movie, and did it for a laugh. And the guy that wrote and directed that movie ended his directorial career with a “comedy” so timid that it takes not a single risk.

I’m going to assume that you know the basic Dracula story, so I’m not going to bore you with that here. In this case, the count is played by Leslie Neilsen, with Brooks himself taking on the role of Van Helsing. Other notables include Steven Weber as Jonathan Harker, Amy Yasbeck as Mina, Lysette Anthony (from Krull!) as Lucy, Harvey Korman as Dr. Seward, and Peter MacNicol as Renfield. MacNicol is probably the best thing here, which should be a huge compliment based on this cast, but isn’t.

Dracula: Dead and Loving It follows the basic plot of Bram Stoker’s book, adding in what is intended to be funny and typically failing. There are a number of reasons why this movie doesn’t work. I’ll leave it to you to decide which of these is the saddest when committed by Brooks.

The first is that this is a movie that takes no risks. Not in terms of its subject matter, the language, the plot, or anything else. Everything here is safe. What made Blazing Saddles work is that Brooks created a film that work vaguely as a western, but is very much about social issues, especially race. This is a movie that has nothing to say beyond trying to spoof Dracula exclusively. There are a lot of ways that the story could be spoofed, but Brooks decided to take the safest path possible, doing simple sight gags and puns that aren’t ever worth the groan rather than risk offending a single person.

Second, it’s lethargic. There are a lot of jokes that are repeated and never work. Early in the film, there’s a joke based on the strange giant hair piece used in Bram Stoker’s Dracula. In this case, it’s not hair, but a weird hat. It’s not that funny when it happens. The fact that literally the same joke gets used toward the end of the film is unconscionably lazy. Bad enough to have jokes that don’t land, but to have the same joke not land a second time smacks of desperation. The same happens with a “last word” joke that also never quite sticks the landing.

Third, it is completely unfocused. I’ve complained in the past that horror-comedies tend to think comedy first, horror second. Any horror seems to happen almost by accident because these movies tend to be comedy first, horror wherever it can be shoehorned in. It’s kind of the opposite problem in this case. This is a Mel Brooks movie. No one expects this to be anything but funny. And yet, there are a couple of moments here that appear to be seriously trying to go for a genuine scare. I’m all for a good scare, but in a movie directed by Mel Brooks?

Finally, it’s not funny. None of the jokes are that good and, rather than a steady parade of them, there are far too many of them that take a great deal of build-up. Because of this and because the film takes absolutely no risks at any time, these jokes are incredibly easy to predict, sometimes almost word for word.

So yeah, I hated this.

Why to watch Dracula: Dead and Loving It: Are you one of those people who loves terrible movies? This is here for you.
Why not to watch: It’s not just bad, it’s embarrassing.