Not Another Power Tool Movie 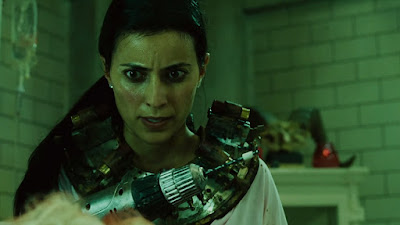 I suppose since at this point I’ve watched more than half of them on the main list, I’m actually pursuing the They Shoot Zombies list of horror movies. There is literally no other reason I would have spent time today with Saw III, which is thankfully the last of the franchise on the list. I just hope it stays that way.

The Saw franchise is a great exemplar of the notion that not only do sequels tend to be worse than the original film, but that they get exponentially worse as time goes on. Admittedly, this is a trend frequently bucked, but the basic idea is still a common one, and this franchise might well be the poster child for it. The original Saw is surprisingly good. At the very least it’s a great idea for a film—a serial killer offers people a chance to save themselves by earning their freedom, generally through some trial of terrible physical pain and suffering. The killer, Jigsaw (Tobin Bell), has a philosophy that thinks people should appreciate their lives. Most don’t, he believes, and thus he sets up these gruesome contests to make those who survive appreciate the lives they have.

We’re going to start with a couple of gruesome deaths just to get us in the mood. That’s actually where the Saw movies have gone downhill for me. The first movie had its moments, of course, but it wasn’t overtly nasty. This one is replete with intestines and viscera for no reason other than to have them in the movie.

Saw III also changes the basic premise once again. In the first movie, people were giving a test to determine more or less how much they value their own lives. In the first sequel, a group of people is put to the test simultaneously. This time, after the first couple of Jigsaw’s “games,” we have one person who is put through a series of tests involving other people who have wronged him and who he may or may not save.

All of this is going to involve Jigsaw nearing death because of a brain tumor. His assistant (Shawnee Smith) kidnaps a doctor (Bahar Soomekh) to keep Jigsaw alive while his new victim goes through his series of tests. To keep her honest, she is fitted with an explosive collar that is essentially attuned to Jigsaw’s heart monitor. When he stops living, the collar explodes, which is not going to do a great deal for the doctor’s head.

It’s a shame, because the original premise of these movies is a good and interesting one. This is a series that could easily have been taken in new and interesting directions, and instead we’ve more or less been given the lowest common denominator because that’s what sells.

Saw III is a huge disappointment. This could have been interesting or at least presented conflicts that weren’t essentially this simple and simplistic. We deserve better, and so does the original movie.

Why to watch Saw III: In for a penny, in for a pound?
Why not to watch: Seriously? You need a reason to avoid this?