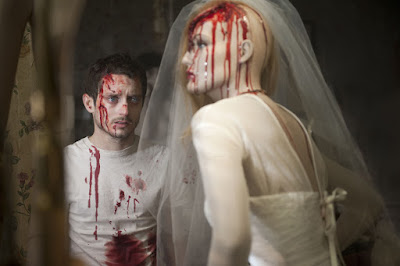 Remakes tend to have a poor reputation, and with reason. Frequently they are made as something like a cash grab, trying to capitalize on name recognition. There was a decade or so-long trend of immediate American remakes of Japanese horror movies, most of which were terrible and most of which seemed to be nothing more than trying to make a buck from an audience that won’t watch something with subtitles. Still, I can understand the appeal of a remake. Your story is already written, and if you feel like you can add something to the way in which that story was told, the remake seems like a perfect choice. All of this leads me to a single question: of all the movies that someone could remake, why in hell would someone want to remake William Lustig’s Maniac?

Yet, that’s where we are here, with a 2012 remake of a film that feels honestly like the actual film stock was made of oil and grease. This remake features two things that make it perhaps more interesting than the original version. The first is that it stars Elijah Wood as the deranged killer obsessed with mannequins who goes around New York killing women, scalping them, and attaching their hair to his mannequin collection with a staple gun. Do yourself a favor—reread that sentence, since that is the plot here, and decide whether or not this is worth your time. The second potentially interesting fact about the film is that it is filmed like a first-person perspective video game. While Wood appears in pretty much every shot, we see his face only in mirrors and similar objects.

There’s not a lot to describe here in terms of the plot beyond that sentence above. Oh, there’s a great deal of Freudian stuff about why our killer Frank Zito is obsessed the way he is. It turns out his mother was a prostitute who frequently put him in the position of forcing him to watch her nocturnal activities. While it’s not always clear, I guess the idea is that Frank finds the mannequins being both feminine and genderless comforting. Anyway, there’s a moment where Frank almost seems ready to break free from his homicidal ways when a photographer similarly obsessed with mannequins (Nora Arnezeder) takes an interest in Frank’s work restoring antique mannequins. But nothing good is going to happen to anyone here.

My problem with Maniac is that I don’t really know how to react to it. It is both intriguing and horrible at the same time. The film is beautifully shot, for starters, and the first-person perspective of the killer, while not unique, is certainly interesting when done for this length of time. In that respect, the movie this reminds me of the most is Peeping Tom, and the first-person sequences have the same effect as it did in that film. It is completely transgressive in the sense that it makes the viewer complicit in the crimes that are happening on screen. That these crimes are being committed by the person that we immediately associate with Frodo Baggins has a sort of brilliance to it as well. More on that in a moment.

The biggest problem with the film is that it is completely nihilistic. There’s nothing here that smacks of anything more than pure disgust and misogyny, and that’s pretty disappointing. I mean this in as literal a sense as I can. This isn’t a film about women in danger from a psychopath. This is a movie where a very deranged and sick individual hunts women, kills them in brutal fashion, and then tears off their scalps. It’s a movie made purely for the lowest possible element in the audience. It’s not even titillating in any way. Sure, there’s some nudity here, but once again, the entire film seems to be made of grease…or perhaps lube.

I will say this, though: I find it interesting to see what Elijah Wood is doing with his career. In many ways, Wood is having the same experience as an actor like Daniel Radcliffe. Wood, thanks to the Lord of the Rings movies, doesn’t really have to do anything he doesn’t much want to. He can pick and choose projects as they interest him. Where a film like Maniac might be a career-killer or the sort of film that causes someone to be immediately typecast, Wood doesn’t have to care. He’s freed up to take these sorts of roles because he doesn’t have a reason not to.

So in the final analysis, there’s not really a good reason to watch Maniac. It’s ugly and has no real reason to justify its existence. If you’re into the lowest, scabby end of the film spectrum, it’s here for you and because of how it is filmed, it classes things up at least a little. But that doesn’t make it good, edifying, or worth seeing.

Why to watch Maniac: It’s interesting to see where Elijah Wood is going now that he no longer has to worry about things like money.
Why not to watch: Of all the movies to remake, why this one?