Opera, Yes. Phantom? Not as Much 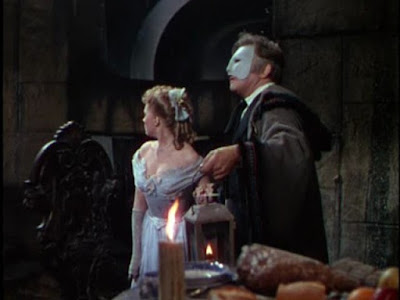 I’ve seen multiple version of Phantom of the Opera, and I have to say that going in, I was interested in the 1943 version of the story. Some of that comes from having Claude Rains in the title role. The Phantom is not really one of the Universal monsters in any real sense. There was no series of films concerning the character and no continuing mythology beyond this one story. Part of that probably stems from the fact that, unlike many of the other Universal monsters, the Phantom is literally just a man. He’s not supernatural or devolved or anything else—he’s just a crazy dude with scars.

Another reason I was intrigued by this version of the story is that one of the leads is played by Nelson Eddy. I’m not much of an opera fan and I can’t say I love the stylings of Eddy that much, but it would be interesting to see a role in the film really handled by someone with impressive pipes.

What we get, though, is a lot of backstory. Our ingénue in this case is Christine DuBois (Susanna Foster), a young singer who has managed to get on stage at the Paris opera, but has not really had much of a chance outside of the chorus. She is pursued romantically by the opera’s baritone, Anatole Garron (Eddy) as well as a local gendarme, Raoul Daubert (Edgar Barrier). Unbeknownst to her, she is secretly loved from afar by Erique Claudin (Claude Rains), a violinist in the opera orchestra. Claudin, despite his position, is broke because he is secretly paying for voice lessons for Christine. Sadly for him, he’s also losing the ability to play the violin because of stiffness in his left hand, which causes him to be dismissed.

Now desperate for money and needing to find a way to pay for Christine’s continued lessons, Claudin goes to a local music printer to sell the concerto he has been working on for two years. He eventually confronts one of the proprietors of the shop about his piece and is told to get lost. However, he then hears his own music playing; as it happens, the other partner at the firm likes the work and wants to publish it. Claudin loses his mind, though, and murders one of the partners, but is disfigured when he is splashed with acid. And so he runs back to the opera and begins living below the building in the sewers.

Here’s the thing—this movie is just a touch over 90 minutes long, and we don’t actually see the Phantom in the mask and cape until something like the 50th minute. Even then, he says a few words to Christine, makes a couple of threats, drugs the opera’s female lead so that Christine can fill in for her, and then (because it’s one of the centerpieces of the story), causes a massive chandelier to fall on the audience. We get the kidnapping of Christine and the retreat into the bowels of the opera house at the end, of course. All of this more or less follows the basic outline of the story.

The problem is that it’s desperately tame. Claudin seems harmless despite dropping the chandelier on people. We get no time for his insanity to be built up. In focusing so much on the Phantom’s origin story (for lack of a better way to put it), we’re left with about half the film to tell the actual story of the Phantom. There’s a lot more that should be here, and if the story had been started with the opera building already being “haunted” by the Phantom, there would have been a lot more time to build up his insanity as well as to make him more sympathetic and less simply pathetic.

Additionally, a great deal of the running time is spent on the actual opera. There’s a lot of singing in this movie, and rather than move the plot forward, we’re sat watching the actual opera for long periods of time. In many cases, there’s not much relevant to the plot happening in these scenes. Even the chandelier takes far too long, and there’s an awful lot of operatic singing in the scenes that build up to it. I get it—they got Nelson Eddy and wanted everyone to know it.

I’d love to love this, because there’s a lot about the basic story that I think is really interesting. The Phantom could easily be built into a sympathetic character, especially in the versions of the story where he is clearly mistreated and robbed and driven insane by events that actually happen to him rather than ones he just suspects happen to him. I’ll give the movie full marks for an interesting surprise ending, but ultimately, this was a disappointment. There needs to be more horror—or at least more suspense—in a horror movie.

Why to watch Phantom of the Opera: Girl power?
Why not to watch: It’s the tamest version of this story possible.