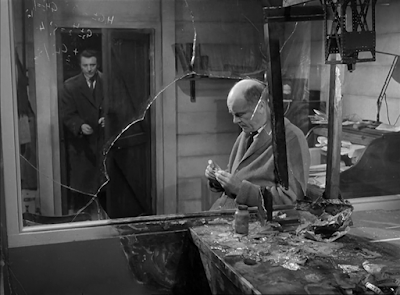 I have a penchant for 1950s science fiction and horror movies. There’s something pure about them that I love. Don’t get me wrong—I love the later stuff and the current stuff, too, but there is a particular vibe to the science fiction in the Cold War/Space Race years that I love. Hammer Studios was a big part of that, and so I’m always interested when one of these comes in over the transom. In this case, that’s X: The Unknown, a film that deals with the idea of nuclear power and radiation in a world that was steal dealing with the literal and figurative fallout from Hiroshima and Nagasaki.

Like a lot of the science fiction movies from this era, the emphasis is going to be less on the science and far more on the fiction. Soldiers on a routine training assignment in Scotland are learning to use a Geiger counter when a new source of deadly radiation appears, killing one of the soldiers and burning another one badly. Two scientists, Dr. Royston (Dean Jagger) and “Mac” McGill (Leo McKern), both of whom have atomic energy backgrounds, are called in to investigate.

Meanwhile, this mysterious source of radiation appears to be on the move. A young boy is attacked by something off camera, and later a young doctor is more or less melted into a charred puddle of goo by something highly radioactive. More and more deaths follow, including a few back at the original site. The rest of the movie consists essentially of the radioactive monster (which turns out to be sort of a glowing atomic version of The Blob) crawling around and attacking people, others trying to figure out a way to stop it, and not a great deal else.

Here’s the thing: X: The Unknown is staggeringly dull. This might have been vaguely interesting in 1956, but I couldn’t find more than a minute or two of this that managed to hold my interest in the slightest. This isn’t dull like The Creeping Terror or Monster a Go-Go, but it’s got very little to keep any interest. It tries desperately to be interesting by keeping the monster hidden for as long as possible, and this doesn’t work, either.

I do try to write longer reviews than this, but I honestly don’t have a great deal to say about X: The Unknown. The idea isn’t a bad one, and I understand exactly how this might have played on the fears of a nation that felt reduced and irrelevant in a world with suddenly terrifying and titanic forces at play, but in today’s world, there’s just nothing here. There’s no real suspense, no real build-up.

It’s worth noting that the copy of this that I watched came with another early Hammer film called Four Sided Triangle. While this wasn’t a barn-burner either (there’s a terribly long section in the middle where people do unexplained science-y stuff for a really long time), the ideas were more interesting, and so was the film.

Why to watch X: The Unknown: Early Hammer horror/science fiction.
Why not to watch: It’s really, really dull.