Films: Phenomena
Format: DVD from NetFlix on The New Portable. 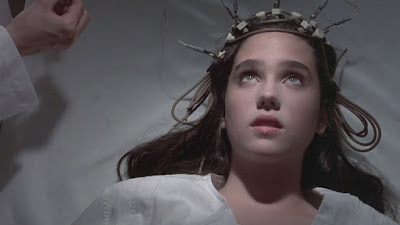 I’ve said it before and I’ll say it again—I’m not a massive fan of a lot of Italian horror. So much of it turns out to be nonsensical in my opinion. I get the sense in many cases that a lot of Italian horror—Dario Argento’s films as much as anyone else’s—are not written with the plot in mind. Argento seems to write with scenes he wants to film and then writes something that sort of loosely connects them. That seems like the case with Phenomena, a film that has particular plot points that seem like they should be important and then turn out not to be.

So let’s dive into this thing head-first. We’re going to start with a murder—a young woman gets abandoned by a tour bus somewhere in Switzerland, gets attacked, and is beheaded. Eight months later, Jennifer Corvino (Jennifer Connelly) show up in roughly the same area as a new student for that favorite of all Argento tropes, an all-girls school. We’re going to learn three things about Jennifer that are of varying levels of importance based on what you think the movie is going to be about. First, she is the daughter of a famous actor. Second, she frequently walks in her sleep. Third, she has the ability to talk to insects.

Let’s get a couple of those things involved in the plot right away. One night, Jennifer sleepwalks and witnesses the murder of another student. When she wakes up, she is discovered by a chimpanzee. Yes, you read that correctly. The chimp, named Inga, leads Jennifer to the home of John McGregor (Donald Pleasence), a forensic entomologist. The two bond over bugs, especially when McGregor determines that Jennifer has a telepathic bond with them.

Since this is an Argento film, we need more murders. Our next murder victim will be Sophie (Federica Mastroianni), who happens to be Jennifer’s roommate. Despite the fact that there are clearly murders happening around this school, the topics of conversation are that Jennifer is a sleepwalker and might be psychotic. The only evidence that she might be psychotic is that she is a sleepwalker, mind you. The other students are so involved with the fact that Jennifer is a sleepwalker that they don’t seem to care that their fellow classmates are being gutted.

I find this movie so frustrating for so many reasons. I’ve seen a review of another classic Italian horror film--The Beyond in this case—that essentially said you have to ignore concepts like plot and just enjoy the spectacle of what is happening on the screen. I’ve said essentially the same thing, but it doesn’t mean that I’m completely comfortable with that. I’ve also said a number of times on this blog that the aspect of filmmaking that most interests me is narrative, and films like Phenomena have a connected scenes with cool visuals in place of a coherent story.

What I mean is this—the fact that Jennifer Corvino evidently can communicate with insects should be the central focus of the entire film. It is used in places—Jennifer follows an insect to help locate the killer, for instance, and uses a massive swarm to shut up all of the girls at her school. But her insect telepathy plays no part in the conclusion of the film. What we get instead is a character who wasn’t even hinted at for the first 90 minutes who appears, again specifically because Argento wanted a character who looked like that in the film. Jennifer’s telepathy, which could be the thing that saves her or damns her is of no value at the end. It might as well not be a part of the character.

And this is what I find so frustrating about these films. There are moments that are fascinating to see, visuals that are the sort of iconic moments that get remembered for years, like the initial killing in Suspiria. But they are completely disconnected from anything like a story that makes sense. Characters show up here for no reason other than as fodder. One character, in fact, appears as a voice on the phone. When he shows up, it’s for less than 30 seconds before he is literally beheaded.

Cinema is a diverse art form, of course. There are plenty of different ways to make a movie and plenty of different results someone might want to achieve in making a film. But if the ultimate goal is some specific visual moments, why not go into a more static visual medium? Why do I need to see a nonsensical collection of scenes play out so I can see a cloud of insects block out a window?

And don’t get me started on the ending. Holy crap, but I can only think that this was Argento’s goal the entire time—he wanted to get to this shot, and put the audience through the rest of the film to get to it.

Why to watch Phenomena: Since it’s an Argento classic, you kind of have to eventually.
Why not to watch: Like most Italian horror, it doesn’t make a great deal of sense.