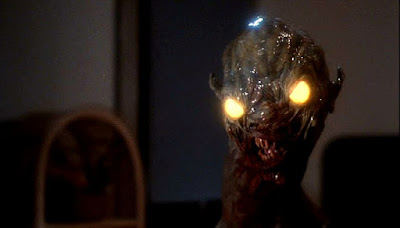 I remember when C.H.U.D. was released, but I had never seen it until today. Based on the reactions I remember from the time, I genuinely thought C.H.U.D. was a comedy, but it’s not. I think that probably comes from the fact that it’s kind of a dumb name for a movie. If you weren’t aware, the acronym stands for “cannibalistic humanoid underground dweller.” What that means for us is that we’re going to have a movie where the creatures are essentially mutated humans that live in the sewers of New York.

Here’s what I found really surprising about this movie: C.H.U.D. is, at its heart, an environmental film and very much an anti-authoritarian film. This is a film that, for a wonder, makes a legitimate social statement, and does so using Daniel Stern of all people as the mouthpiece. In truth, it’s not a great movie. I watched it because NetFlix, Amazon, Hulu, and the libraries in my state don’t have it. When you find a film like that, it’s best to watch it right away. I expected a dumb horror comedy and, while the movie definitely has issues and plot holes, I’m a lot happier with it than I expected to be.

So let’s talk about the different plot threads that we’re going to have to weave together into a narrative. The film opens as a woman walking her dog gets dragged into the sewers by an unseen creature. As it happens, that woman was the wife of police captain Bosch (Christopher Curry), who has been dealing with a sudden rash of disappearances. The first word of those disappearances came from “Reverend” A.J. Shepherd (Daniel Stern), who has set himself up as someone who helps feed and care for the homeless. It turns out that Bosch and Shepherd have a history and that Shepherd’s change to being a positive force for the homeless is genuine. But it’s also noteworthy that the police don’t start taking notice of the disappearances until non-homeless people start disappearing.

Another thread to weave into this is photographer George Cooper (John Heard), who has given up working in fashion photography to work on more meaningful stories, including one about the homeless. This is despite the fact that his girlfriend Lauren (Kim Greist) is desperate for him to photograph her for some modelling work. Cooper’s connection to the homeless soon has him pulled in, trying to figure out what is going on underneath the city.

So what is happening? It seems that the Nuclear Regulatory Commission has been trying to move toxic waste through New York, but when blocked from shipping it out, has been forced to story the waste underground. Because, like most movies, C.H.U.D. doesn’t understand how science works, the toxic waste has started turning the homeless who live underground into mutated cannibalistic monsters that have claws, fangs, greens skin, and glowing eyes. Because that’s exactly how evolution works. Regardless, the reasons that Reverend Shephered has been missing some of his regulars at the soup kitchen is that they’ve either been eaten or they’ve been turned into radioactive flesh-eating monsters.

Where we go from here is exactly where you think we’re going to go from here. Creatures attack, the government pushes back, the cops change positions on what to do depending on the prevailing opinion and the information they have, and the people we are supposed to root for (specifically George, A.J., and Lauren) are constantly put into real danger by the radioactive critters. There’s a little bit of gore—nothing too nasty, but enough to shock someone not really ready for it, and an ending that feels very anti-climactic.

The ending is the biggest problem with C.H.U.D.. We’re given something that very much looks like it might take care of the creatures, but we become involved with the plight of a couple of characters instead, and not only are we not given any information on the fate of the creatures, it’s almost as if what happens to them becomes completely unimportant in the second half of the third act. It seems like a genuine oversight when it comes to the script.

One of the things I enjoyed a great deal about C.H.U.D. is the cast. Daniel Stern, of course, is immediately recognizable, but so is John Heard; Eddie Jones (who plays the police chief); Sam McMurray, who plays a cop; and both Frankie Faison and Michael O’Hare. Additionally John Goodman and Jay Thomas show up as cops in a diner. I was also mildly obsessed with Kim Greist about a year after this film came out, since she was the love interest/dream woman in Terry Gilliam’s Brazil.

Anyway, C.H.U.D. is not a scary movie at all. It’s fun, though. I was surprised at how seriously it takes itself. I was much more surprised—pleasantly so—that it genuinely had an agenda and was able to put it out pretty directly and clearly while showing us glowy-eyed cannibals. In a lot of respects, it’s a movie that has aged really well in terms of its politics.

Why to watch C.H.U.D.: Politically, it doesn’t feel 36 years old.
Why not to watch: It doesn’t really stick the ending.