If Only They Had a Budget... 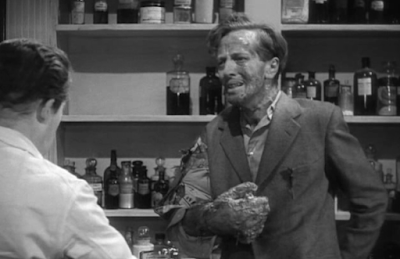 Science fiction from the 1950s tended to deal with some very specific topics in a number of different ways. One of those major topics was space travel. Generally speaking, there were two basic space travel plots. The first, and by far much larger group of films dealt with space travel as a robust phenomenon. People in these films are flying between planets and solar systems, exploring the universe in a pre-Star Trek fashion. The other set of films was set more in the era’s present, with the first steps of space exploration happening. For this basic plot, the big part of the story tended to be a capsule (manned or unmanned) coming back with something that attached itself from outer space. Of these, The Quatermass Xperiment (sometimes called The Creeping Unknown) is one of the granddaddies.

The thin outline referenced above will form the guts of our story. The British Rocket Group launches a capsule under the tutelage of American professor Bernard Quatermass (Brian Donlevey). It goes up with three men and comes back with just one. Victor Caroon (Richard Wordsworth) seems to still be around, but his companions Reichenheim and Green are nowhere to be found. Caroon’s wife Judith (Margia Dean) complicates matters slightly, although her concern for her husband is certainly understandable.

So let’s short-circuit the plot here and get right down to the guts of it. Caroon is almost completely comatose, although he does seem to be capable of moving when no one is looking at him. He also seems to be disfigured in certain ways. Scotland Yard inspector Lomax (Jack Warner) surreptitiously fingerprints Caroon, thinking that he might be a part of the reason the other two men vanished. He reports back that the fingerprints he pulled from the man are nothing like human fingerprints.

You can see where this is going, right? We eventually get a video recording from inside the ship, which shows a disturbance at one point, causing all three of the men to pass out. It’s soon evident that Reichenheim and Green were attacked and essentially dissolved by something from outside the ship, and that Caroon was attacked and is now a host. This would be easy to deal with had Judith Caroon not smuggled her husband out of the hospital, only to be found alive and unharmed but completely insane from her contact with what is left of her husband.

So, Caroon is a space monster, and he goes on a bit of a killing spree, knocking off a pharmacist and a zoo full of animals. Eventually, he gets cornered in Westminster Abbey, where he has become something akin to the Blob. He’s a mass of…stuff…incorporating parts of what he has attacked and absorbed. And, of course, he’s also covered with spores because there’s only real tension here if the Caroon-thing might reproduce a few thousand-fold and quickly destroy the planet.

Like a lot of early science fiction, The Quatermass Xperiment has better ideas than it has budget. This was made in a time when we didn’t really have a great deal of experience putting anything into orbit and getting it back, so the idea of an outer space filled with malevolent creatures just waiting to hitch a ride inside a warm human body was one that I’m sure had a great deal of traction with easily-frightened people. As such, this turns out to be a pretty interesting film. The problem is that not for a moment does anything look remotely like we’d expect it to. It’s cheap, and while it does the best it can, it’s never not going to look cheap.

The most interesting part of this, though, is the titular character. In many an early science fiction film, the scientist was portrayed as the hero, a sort of matinee idol who had all the answers and could solve every problem with a combination of cool rationality and quick action. Not so our Professor Quatermass. This is a short-tempered, unlikable man who wants only the results of his experiment, damn the cost. It’s interesting that he is portrayed as not only unlikable, but also as someone who is, essentially, reckless. I won’t call this film anti-science, but it certainly has elements of that.

Is it good? Kinda. It’s fun, and perhaps that’s enough, because for all its good ideas, there isn’t a great deal here that’s that new.