I Melt with You 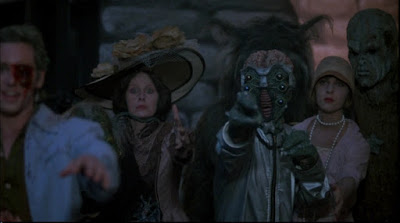 Based on the name alone, you know that Waxwork is going to take place at least in part in a wax museum. What that almost certainly means is that people are going to show up as a part of the exhibit—that they will be doused in wax or transformed into sculptures, or something. That is the trope. The good news here is that Waxwork really goes out of its way to do something more than just that. It really wants to do more than simply retread movies like House of wax.

It also has a very fun and entertaining B-movie cast. Zach Galligan, David Warner, Patrick Macnee, John Rhys-Davies, and even Ator himself, Miles O’Keeffe are here. There’s also an old-school melee at the end of the film that is as ridiculous as you think it’s going to be. It’s stupid, but it’s also stupid in the best of ways.

Our main character is going to be Mark Loftmore (Zach Galligan), who is supposed to be sympathetic despite the fact that he is disturbingly rich and spoiled. Mark has a thing for China (Michelle Johnson), who is going to be our movie’s slut since every horror movie in the 1980s has to have one. Sarah (Deborah Foreman) is interested in Mark. Sarah and China are walking to class at the local college one day when they discover that there is suddenly a wax museum in the neighborhood. They are accosted by the proprietor (David Warner) and invited to come that night, and to bring friends, but no more than a total of six people.

So, that night, Sarah, China, and Mark show up with Gemma (Clare Carey), Tony (Dana Ashbrook), and James (Eric Brown). What they find is a fairly standard waxwork house of horrors with some, but not all, of the exhibits completed. When no one is looking, a couple of our visitors—Tony and China in this case—step into exhibits and are essentially transported to a fantasy world version of the tableaux. Tony ends up in a werewolf story where he is eventually killed after being bitten by John Rhys-Davies while China shows up at Dracula’s castle and is eventually transformed by the bloodsucker (Miles (and miles) O’Keeffe). And, once they die in the tableau of choice, they essentially appear in it as a victim.

Much of the rest of the film is going to be concerned with Mark and Sarah attempting to figure out what is going on. They’ll finally get help from Sir Wilfred (Patrick Macnee), who was once an associate of Mark’s grandfather (because of course he was). He tells them that the waxwork proprietor has made a deal with the devil. If he can feed the wax effigies souls of victims and empower them with artifacts they owned in life, he can bring them to life and cause the “Voodoo end of the world.”

So that’s what’s going to happen. Eventually, Mark and Sarah are going to have to confront the last two tableaux and survive them if possible, since once there is a victim for each scene, the end of the world starts to take place. For Mark, this means dealing with a zombie scene. For Sarah, it’s an encounter with the Marquis de Sade in the closest thing this movie gets to sex, which is honestly something of a shock for a late-‘80s horror movie. Whipping, the discovery of the weakness of the wax museum, and a massive battle ensue before the end credits, and naturally there’s going to be a set-up for a sequel (Waxwork II: Lost in Time).

Waxwork is one of those films that is more or less camp, and works because it is camp done the way it should be done. Forced camp rarely works the way it’s supposed to. Unintentional camp, and Waxwork skates this line pretty closely, is often a great deal of fun. The reason it works is that Waxwork, billed as comedy or not, wants to take the actual story seriously, and it plays it straight. But it still ticks most of the boxes. There’s a vat of bubbling boiling wax. Would you be surprised if I told you someone falls in it?

There’s a small part of me that understands why this was marketed as a comedy. While the movie isn’t really funny in any way, it has the structure of a comedy in a lot of places. It feels like it wants to be funny even if it really isn’t that funny. It wants to be. It wishes it were…but it’s just not.

Why to watch Waxwork: It really tries to do something different as a film that takes place in a wax museum.
Why not to watch: It’s marketed as a comedy and it’s not that funny.