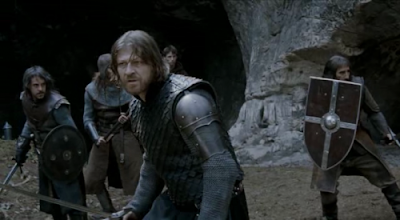 One of the reasons I love the horror genre as much as I do is because, since it often tends to be a low-budget genre, you get to see a lot of people at early points in their careers. In the case of a film like Black Death, actors like Sean Bean and David Warner were certainly established by this point in their careers. This is much less the case with eventual Oscar winner Eddie Redmayne, who looks like he’s about 12 in this.

As you probably can guess from the title of this movie, Black Death takes place during the plague in Medieval England. The plague has just reached a monastery where young novice Osmund (Redmayne) lives. Osmund, for all of his dedication to his god, has an illicit relationship with Averill (Kimberley Nixon), who has taken refuge in the monastery. Realizing that the plague has come to them at last, Osmund sends Averill away. She tells him that she will wait for him in the nearby forest for a week.

Osmund’s reaction to this is to look for a sign for what he should do. The sign comes with the arrival of Ulric (Sean Bean), an envoy from the local bishop. Ulric and his team are looking for a guide to a nearby village that is alleged to have had no cases of the plague. This being the Middle Ages, you can bet that they aren’t looking for advice on avoiding the plague—the general thought is that the village is under the leadership of infernal powers, and is avoiding the wrath of God thanks to protection from locis infernalibus. Seeing this as the sign he wanted, Osmund volunteers to lead them, and while the abbot (David Warner) is displeased that a young novice would leave the monastery, he is unable to prevent this from happening.

And so off they go. Along the way, a couple of important events happen. The first is that Osmund discovers Averill’s clothing in the forest torn and bloodied. The second is that one of Ulric’s men is discovered to have the plague, and is killed to put him out of his misery. Both of these events are naturally going to be important before we get to the end.

The group does eventually find the village in question, and while their arrival is initially treated as friendly, this is not a condition that lasts. It’s clear that Ulric’s group thinks the village is being run by a necromancer, and the villagers know this, and drug the entire group, placing them in a water-filled pit, and demanding that they renounce their beliefs. Additionally, Osmund sees Averill’s body and also sees the local village leader Langiva (Carice van Houten) raise her from the dead. It’s soon revealed that Langiva and her co-leader Hob (Tim McInnerny) are (gasp) atheists at the very least.

Black Death is one of those movies that is smart enough to offer hints for people who have a little bit of knowledge. One of the biggest clues is Hob himself, since his name is literally a name that has been used for Satan in the past. That said, one of the great strengths of the film is that it’s never really made clear whether or not Hob and Langiva are really powered by Satan and his minions.

One of the things that Black Death has going for it is that this film has decided to be as grim and grimy as it can be to fully depict the world of the story. There’s a lot of mud and blood and pain in this, as there should be. Black Death gives us something that approaches a sort of worst-case Medieval world as opposed to the much more sanitized Renaissance Faire depiction that we tend to be used to.

Perhaps the biggest issue with the film is that there aren’t a ton of real surprises here. This is a dark film with the worst possible outcome for everyone pretty much all the time. Nothing good really happens for anybody, and the final couple of minutes are disturbingly bleak and terrible.

As for the question that is the title of this review, I leave you with a couple of thoughts. Bean is known for not surviving to the end credits. In this film, he leads a more or less military expedition into an area potentially controlled by evil forces during a massive pandemic. I’ll let you guess the answer.

Why to watch Black Death: It’s really surprising how few movies there are on this event.
Why not to watch: It’s pretty nihilistic.