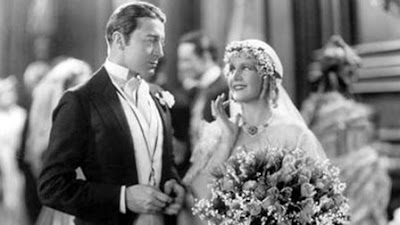 1001 Movies bloggers are a particular breed. We stick together. When I received an email today from Adolysti that mentioned the bulk of East Lynne could be viewed on line, I knew what I was going to review today. There is a caveat with watching this version of East Lynne online: the last 12 minutes are missing. So here’s the deal—I’m going to spoil this movie. I’m going to do this for a couple of reasons. The first is that aside from the total completist, most people don’t have a reason to watch a movie missing the last 12 minutes. The other is that if you do watch it, you’re going to have to look up the ending anyway, and it wasn’t easy to find—Wikipedia doesn’t list it. I finally located what happens in the last 12 minutes on the TCM website.

As will surprise virtually no one, a movie made in 1931 based on a book from the middle of the 19th century proves to be wildly melodramatic. This is one of those films where the entire plot could be rectified by one clear conversation or one person being less of an idiot. I find movies like this very unsatisfying. It comes very close to moralizing, and I never like feeling like I’m being preached at.

Lady Isabel Dane (Ann Harding), wildly popular in London, marries Robert Carlyle (Conrad Nagel), a solicitor who lives in the country. She promises her many friends that she will attempt to bring the joy and social life of London to her new home at East Lynne (hence the name of the movie). But, she is unsuccessful in this for a number of reasons. Part of this is her husband, who is focused almost entirely on his career. Second is her new sister-in-law, Cornelia (Cecilia Loftus). Cornelia is one of those people who lives entirely through her brother. Her entire life is about getting Robert elected to public office, which means she is entirely about appearances. For his part, Robert is entirely under her thumb. He believes everything she says and does everything she tells him to.

A couple of years pass, and Isabel’s life is now entirely wrapped up with her son, but she longs for more of a social life. One day, her husband returns from London with Captain William Levison (Clive Brook), who had been one of her suitors. Levison stays with them and plans to attend an area ball with Isabel and Cornelia while Robert is back in London. The night of the ball, Cornelia claims a headache, but against social norms, Isabel attends with Levison, dances with him, and flirts with everyone. Once the ball is over, Levison professes his love for her and follows her to her room, but is rebuffed and leaves. But, to make the plot work, Cornelia sees some of this, assumes the worst, and tells her brother. Everything comes to a head. Isabel plans to leave with her son, but her husband prevents this and just kicks her out.

So, Isabel heads to the Continent where she once again hooks up with Levison. Levison, it turns out, has been taking bribes during the Franco-Prussian war to keep Isabel in the style she is used to. He loses his job and while the two fight, they are caught in a bomb blast. Levison is killed and Isabel is told that she will soon lose her sight. Naturally, she wants to go back to London to see her son, so she does, sneaking into East Lynne to see the boy without her now-ex-husband finding out. This is where the video ends. So, I’m going to discuss the wildly melodramatic conclusion in the next paragraph. If you don’t want to know what happens, skip one paragraph.

Naturally, Robert discovers his ex-wife with their son and freaks out. Isabel runs away and he chases after her, but by this time, she has lost her sight completely, and she runs over the side of a cliff and falls to her death. Robert is sad. The end.

East Lynne really is about the melodrama and about the terrible dynamic between Isabel and Cornelia. Cornelia is the sort of character who is specifically designed to make the audience angry. She’s evil and awful and terrible. She has no real redeeming qualities, which makes her a perfect melodrama villain. I will give it to East Lynne for trying to do more, though. It doesn’t really go out of its way to make Isabel a saint, or even much of anything. In fact, most of the people in this movie are pretty awful. None of them have a lot of redeeming qualities. I honestly didn’t expect to really like East Lynne that much. It’s a fine exemplar of the style of movies 90 years ago and of the acting in the early talkie era, but not a lot more. It’s interesting because of its rarity, but not really for any other reason. Unless you’re the type of person who feels the need to watch everything (points to self), you’re really missing nothing if you skip this one.

Why to watch East Lynne: It’s fun to be able to talk about a movie that no one else you know has seen.
Why not to watch: The last 12 minutes are missing.