Remember Where You Parked! 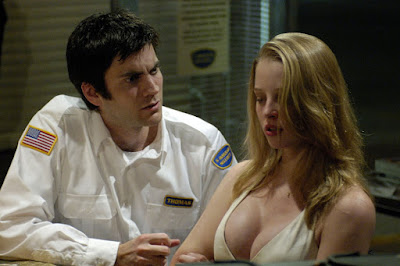 Since finding Tubi as a service, I’ve been spending a lot of time on it. The service has a surprising number of movies that are difficult to find. If I’m honest, P2 isn’t one of those movies; it’s not really that difficult to locate. But, it’s also a movie that has a short shelf life on the service, so I figured I’d watch. Honestly, that’s where I’ve been spending a lot of my viewing time in the specific—watching films that are leaving Tubi in the next few weeks.

P2 (which had to be called Parking 2 in Spanish-speaking countries because “pe dos” translates as “flatulence.”) is a high-concept thriller. On Christmas Eve, a young woman named Angela (Rachel Nichols) is trying to get home from work. Instead, it turns out that the guy who works security in the parking garage (Wes Bentley) is a creepy stalker who is taking this opportunity to trap her and force himself on her. >

That’s pretty much it, and it’s not going to take us long to get there. Angela takes a few angry phone calls from her boss and from her family, who is expecting her for a holiday celebration. She goes down to her car and discovers it won’t start. Thomas (who we eventually learn has clearly sabotaged her vehicle) attempts to jump it, but they discover the battery is not the problem. Angela calls a cab, but finds that she is locked in and the cab drives off. Down she goes to the parking garage again where Thomas chloroforms her and things start getting very upsetting very quickly.

A high concept film like P2 trades entirely on the actions of the characters and the rising tension between them. Since we don’t have an actual story here, what we have instead is a series of events and actions that the characters take. P2 is a cat-and-mouse story, with Angela generally (but not always) playing the mouse. Initially, Angela’s entire goal is to escape (naturally enough) until she gets to the point where she decides to fight back. We’ll have a distraction or two of a couple of different people (including one who drunkenly attempted to accost Angela in an elevator a few days previous), but most of our time is going to be spent with Angela and Thomas trying to hide from or find each other.

P2 is surprisingly gory in a couple of places—unnecessarily so. While there’s a moment of gore near the end that works really well, the encounter with Jim (Simon Reynolds) would be horrifying enough without the gore. It feels like it’s there for a sort of fan service that this really didn’t need. In fact, I think it’s a case where the gore detracts from the story the film wants to tell. All we really need is the insane menace of Thomas and his increasingly weird and awful behavior and the growing change in Angela as she realizes the need to fight back. The gore here is completely gratuitous and unnecessary.

And yet, I understand why it was probably included. P2 is hardly an original film. “Woman trapped by crazed stalker” is a classic genre trope; this one mixes it up only by placing it in a parking garage. On the surface, at least in terms of theme, it’s not that much different from a film like The Collector from the ‘60s, or (if you swap genders) Misery. The real difference is the quality of the film overall and the situations that the characters are placed in.

In a film of this sort that really works well, the captive is going to be in a position where she knows that no help is coming and that no help is probably ever going to come. This is the biggest failing of P2. Sure, Thomas is likely to have a couple of days—Christmas Eve, Christmas, and maybe a few days after. It’s even possible that he’ll have until the new year with Angela. But then what? People are going to know that she’s missing. They’re going to know pretty quickly that she didn’t get home despite what she told her family, and the natural place to look is going to be her office building.

I don’t think I’m overthinking this. It’s clear very quickly that Thomas is insane and is hoping that he can convince the woman that he’s kidnapped to fall in love with him. It’s very much the case that he’s insane. But what’s his endgame here? At most he’s got a day or two before her family comes looking for her, and there’s going to be plenty of evidence around the parking garage as well as a couple of bodies. What did he think was going to happen even if things somehow went according to plan?

So, while there are some fine moments in P2 including an unhinged performance from Wes Bentley, it fails in very real ways.

Why to watch P2: It’s pretty much exactly what you expect it to be.
Why not to watch: It really doesn’t make sense.