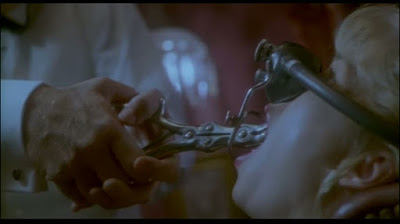 One of the problems of a giant list of movies is that it’s not always easy to find all of them. Imagine my delight to discover the streaming service Tubi, which has a ton of free movies streaming if you’re willing to put up with a few ads. Since it has a lot of otherwise difficult-to-find films, I’ve found that I don’t really mind the ads at all. Such a film is The Dentist, which remained as one of the more elusive films on my original horror movie lists. Well, here it was, ready to be watched and for me to come up with as many tooth-related puns as I could think of.

I’ll be blunt, though; The Dentist is not worth my punning effort. The film makers didn’t put that much effort into writing this movie or making it interesting. Why should I bother putting that much effort into coming up with clever puns to use to enhance the review? In fact, the only thing I was really entertained by here is the fact that, of all people, Mark Ruffalo shows up in this looking about 18.

I’m going to demonstrate this by describing the entirety of the plot in a couple of sentences. A dentist named Alan Feinstone (Corbin Bernsen) discovers on his wedding anniversary that his wife (Linda Hoffman) is cheating on him with the pool boy. He essentially loses his mind and spends a couple of days torturing her, the pool boy (Michael Stadvec), and a bunch of his patients while a couple of cops (Ken Foree and Tony Noakes) track him down. That’s it.

The Dentist honestly seems like such a natural choice for a horror movie, at least in terms of topic. There are a lot of people who have issues with dentists already, so the idea of a killer dentist seems like one that should have happened before. In fact, it kind of did in Marathon Man as well as in Little Shop of Horrors. This, though, goes for as much unpleasantness as it could muster in 1994. We’re given some fairly unpleasant depictions of things like tooth extractions, Novocain injections, and other oral distress, often from the point of view of inside the mouth. If you do have an issue with dentists, this is not going to be an easy sit for you.

But, there’s no real reason why you should want to sit through this in the first place. When I say there is essentially no plot, I mean it. It’s a series of dental torture events lightly interspersed with things that are supposed to drive the plot like a beauty queen (Christa Sauls) managed by Mark Ruffalo, of all people, who gets molested in the chair under the influence of nitrous oxide. There’s an IRS agent (that-guy Earl Boen) who picks the really wrong day to try to bribe Feinstone. And there’s a girl who desperately wants her braces off. The rest of this is really just a form of torture porn focused on teeth.

I hate to say it, but films like The Dentist are why horror often has such a bad name and a bad reputation in film circles. The only thing new here is that most of the horror parts have to do specifically with dentistry, but in a lot of cases, this is just an amped-up (substantially, and with a lot of blood) version of the torture scene in Marathon Man, which showed a lot less and was ultimately a lot more unpleasant and disturbing.

It’s a shame, too, because director Brian Yuzna isn’t entirely untalented. This is the guy who made the sequel to Re-Animator, for instance, and also directed the absolutely crazy-pills movie Society. Here, evidently, the idea of just putting bleeding gums, extracted teeth, and in one case an excised tongue on the screen in lieu of anything actually interesting appears to have been too much.

Dentistry is, or at least could be fertile ground for a horror movie. What it needs is someone to treat it a lot more seriously and really dig into some possibilities. If someone could do something tuned along the lines of, say, One-Hour Photo with a dentist, it would be fantastic if done right. This just wanted to be Grand Guignol of the rinse-and-spit crowd, and as such, it falls remarkably short.

Why to watch The Dentist: Beyond a couple of minutes of a smarmy Mark Ruffalo, not much.
Why not to watch: It can’t even do lurid well.