Men are from Mars, Monsters are from Venus 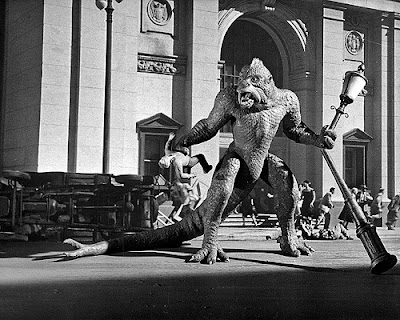 I love creature features from the ‘50s. There’s something so ridiculous and wonderful about them. They so deadly serious and earnest no matter how stupid the premise may be. 20 Million Miles to Earth has the slight benefit of a less ridiculous premise, but the science here is truly terrible. People make scientific pronouncements and discoveries that are patently ridiculous, but it’s how the movie has to work.

We take as our premise that, unbeknownst to the entire world, the American space program—in the ‘50s—managed a manned space shot that flew to Venus and back. Problems on the return trip caused the rocket to crash into the ocean off the coast of Sicily. Two members of the crew are rescued from the wreck by local fishermen while Pepe (Bart Braverman), the son of one of the fishermen, finds a metal canister on the beach.

On his own, Pepe opens the canister, revealing what looks for all the world like a gigantic bar of gelatin soap with a prize inside. Wanting (and I’m not kidding here) a real cowboy hat, since like all foreign kids in ‘50s movies, Pepe wants desperately to be an American, he sells the mass to Dr. Leonardo (Frank Puglia) an Italian zoologist. Since I’ve already told you this is a creature feature, it won’t surprise you that the secret toy surprise inside of the gelatin is actually a creature from Venus that is trapped by Leonardo and his daughter, Marisa (Joan Taylor), who naturally has almost no Italian accent.

What we soon discover is that the creature (never named, but called a “Ymir” in the story upon which this is based) grows rapidly in Earth’s atmosphere for some reason. Why? Because the plot needs for that to happen. Soon enough, it has broken free of Leonardo. Meanwhile, the lone survivor of the wreck, the flight commander Robert Calder (William Hopper) is concerned about the location of that metal canister containing the creature. Given a tip from Pepe, he and others show up to talk to Leonardo just after the creature has escaped.

And, of course, the creature keeps growing. That’s the entire point of the movie, after all—giant creature rampaging, in this case, through Rome rather than Tokyo. And, because this is a movie from the ‘50s, we’re going to get a romance between the only two characters we’re supposed to care about having a romance—Robert Calder and the accent-free Marisa.

20 Million Miles to Earth follows in the footsteps of many a monster movie before it, most notably King Kong. In fact, this is the entire selling point of the film—the creature is stop-motion animated by the great Ray Harryhausen. Like many movies of this ilk, there’s nothing ere to be excited by in terms of plot or ideas or anything more than the animation of the creature, which still works really well despite being obviously stop-motion. Harryhausen’s work was tremendous for its time, and while surely the technique has given us the likes of Wallace and Gromit and the entire Laika catalog, Harryhausen is where much of this technique was initially perfected.

the biggest issue here is not that the animation is clearly evident to a modern audience. It’s not the moments when the creature first fights an elephant(!) that is of equal size to it and then moments later is 6-7 meters tall. It’s not the ridiculous “effects” of soldiers being crushed by debris that almost looks like stickers pasted onto the film. No, the biggest issue is the science, which doesn’t make sense.

The creature, sedated at one point, is seen breathing peacefully. Moments later, we’re told that the creature does not have any lungs. This lack of lungs (and lack of a heart) is why it is somehow impervious to bullets. It’s growing because its main source of nutrition is evidently sulfur. Look I don’t want to punch too hard here, because 20 Million Miles to Earth is fun. It’s dumb fun, but it’s fun. This is even giving it full credit for the distance mentioned in the title at least being close to accurate (Earth and Venus are about 25,000,000 miles apart at their closest), even if the 17-day round trip is about 100 days too fast.

It’s worth nothing that our hero also started in another creature feature 1957--The Deadly Mantis, once the subject of endless mocking on Mystery Science Theater 3000.

Why to watch 20 Million Miles to Earth: Classic Ray Harryhausen.
Why not to watch: Like most ‘50s science fiction, the science is terrible.