Film: Poltergeist II: The Other Side
Format: Streaming video from Tubi TV on the new internet machine. 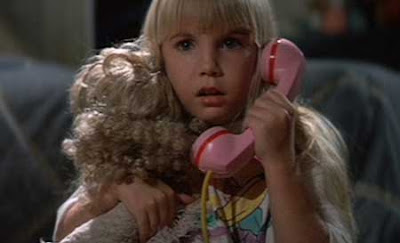 Talk to most any horror nerd and you’ll get a great deal of love for Poltergeist, one of the best arguments that making a good, scary PG movie is entirely possible. You won’t get a great deal of love for the sequels, making the Poltergeist trilogy the Matrix trilogy of the ‘80s—great first movie, and then straight down hill. But Poltergeist II: The Other Side was available to me, and I’d seen the pictures of the skeleton-faced dude enough times to think I knew what I was in for. And, boy, was I wrong.

Poltergeist II: The Other Side picks up about a year after the end of the first film despite the fact that a good four years have passed in reality and the kids are noticeably three or four years older than they were in the first film. Four of the five Freelings—father Steven (Craig T. Nelson), mother Diane (JoBeth Williams), middle child Robbie (Oliver Robins), and youngest child Carol Anne (Heather O’Rourke) have moved to Phoenix and are living with Diane’s mother, Jess (Geraldine Fitzgerald). The oldest child Dana (Dominique Dunne) was likely to have been written out of this film anyway, but could not be included since the actress was murdered by her boyfriend shortly after the release of the original film.

But, of course, things are not well with the Freeling clan. Mystic and medium Tangina (Zelda Rubenstein) with shaman friend Taylor (Will Sampson) discover a weird shrine/temple/collection of bodies underneath what would have been in the Freeling’s swimming pool had their house not imploded. Sensing that something bad will happen to the family, Taylor tracks them down and acts as a sort of spirit guide so that the family can protect itself from Kane (Julian Beck), essentially the physical manifestation of the angry spirits that are once again on the hunt for the spirit of Carol Anne. To get us to a final confrontation, we’re going to have to have Grandma Jess die, Taylor and Steve are going to have a spiritual journey in a smoke hut, and Tangina is going to show up to tell the family they have to return to the site of their destroyed house.

So, like a lot of movie sequels back in the day, Poltergeist II: The Other Side is greatly inferior to the original film, which is one of the great horror movies of its decade. The truth is that a lot of the special effects in these films don’t really hold up. In Poltergeist, they are sort of accepted as a part of a classic film. In this sequel, they absolutely show their age.

This is not the biggest problem here, though. The biggest problem is that there is rampant 1980s-style racism in this film, virtually all centered on the character of Taylor. It could be argued that long before the creation of the “Magical Negro” character in Hollywood, there was a similar stereotype for indigenous people, and that’s Taylor from top to bottom. Taylor is filled with Native Man magical abilities, and has all of the stereotypical traits you would expect from him. At several points in the film, especially when he is talking about things that are spiritually powerful in one way or another, his speech is accompanied by a sort of “Powwow the Indian Boy” theme, and I kid you not, at several points, his pronouncements were followed by a literal eagle shriek.

This does nothing to address the fact that Steven Freeling is himself really, really racist initially regarding Taylor, telling his wife that he has nothing against “those people” and that he thinks he might have “Injun blood.” Yeah, I get that this was a product of its time, but seriously, that’s just…yikes.

Otherwise, you know what is going to happen here. Things are going to go strange for the Freelings. Eventually, they’re going to have to have an encounter in the spirit world of some sort, and, eventually, we’re going to get to the end of the movie with the family battered but still around. The Poltergeist films—at least the first two—are notable for the fact that they don’t have a body count. That worked for the first film, not as much for this one.

Poltergeist II: The Other Side is derivative in a lot of ways. It doesn’t pack the punch of the original because there aren’t a lot of surprises here. The effects are weak (the spirit world looks a lot like Hell in the second Hellraiser movie) and a lot of the charm of the family from the first film is gone. This feels a lot more cynical in a lot of ways, and that’s a disappointment.

Why to watch Poltergeist II: The Other Side: Because you just can’t get enough of angry dead people attacking a little girl.
Why not to watch: It’s way more racist than you remember.

Posted by SJHoneywell at 6:58 PM