Film: Valiant is the Word for Carrie
Format: Internet video on laptop. 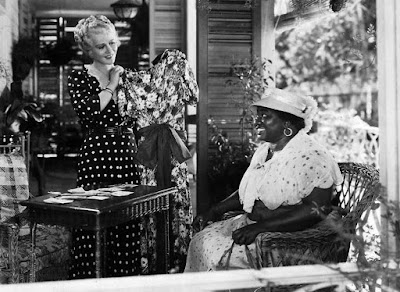 Adolysti has come through once again, and in a big way—another email reminded me of the Ok.ru site that has a number of streaming movies, including a bunch that I’m having trouble otherwise finding. What this means is that you’ll be seeing a chunk of Oscar pictures in the weeks ahead. For instance, Valiant is the Word for Carrie was one of the pre-1940 Best Actress movies I hadn’t seen before today.

The truth about Valiant is the Word for Carrie is that it plays with one of the classic tropes of movies. The “hooker with the heart of gold” trope clearly had to start somewhere, and while I don’t think this is specifically the first place where it shows up, it’s clearly one of the early versions of this when it comes to movies. Our gold-hearted hooker in this case will be our title character, Carrie Snyder (Gladys George), the woman of ill repute in the tiny little fictional town of (and yes, this is what they called it) Crebillon, Louisiana. She is barely tolerated, but when she is befriended by Paul Darnley (Jackie Moran as a child, John Howard as an adult), the 12-year-old son of a local businessman.

Paul, it turns out, is more or less raising himself. His father’s role is as a disciplinarian while his mother is bedridden and dying of whatever mysterious Hollywood disease people die of in 1936 movies. Carrie and Paul’s relationship is an odd one. Paul likes her as a sort of motherly influence in his life that he is otherwise missing. Carrie just likes having the kid around because he’s one of the only people who doesn’t judge her. But, she knows that this relationship has serious issues for Paul’s future, so she sends him away rudely on what happens to be the same day his mother dies. Carrie leaves town, and shortly thereafter, Paul’s father dies and the boy is adopted out to a relative.

Up to this point, Valiant is the Word for Carrie is interesting. Jackie Moran does a creditable job of playing the young Paul, and Gladys George is an absolute charmer as Carrie. But as soon as this initial bad stuff happens, the story takes a deep dive into soap opera territory. Paul runs away and lives with a local. One night, there is a train crash nearby and Paul rescues a 6-year-old girl who calls herself Lady (Charlene Wyatt as a child, Arline Judge as an adult). Lady claims that she is an orphan, being sent to a family that (and again, this is the story they’re going with) won her in an essay writing contest. She decides to stay with Paul. Eventually, word gets to Carrie, who returns to Crebillon to more or less kidnap both kids, informally adopt them, and move back to New York where she buys a laundry business and makes something of herself.

What we have to this point is more or less the first two acts of I am a Fugitive from a Chain Gang, and we’re going to complete that basic story as well. We doodly-doo 10 years into the future. Paul graduates from college, gets a job, and one night is inadvertently responsible for a man’s death. While not legally responsible for this, he feels guilty and takes it upon himself to care for the dead man’s sister, Lilli (Isabel Jewell). Lilli, it turns out, is a manipulative gold digger whose boyfriend is in jail. Desperate to get him out, she’s willing to do anything she can, including marrying Paul and defrauding him. Lady, of course, is madly in love with Paul. You can hear the orchestra at this point, can’t you?

That’s the real problem with Valiant is the Word for Carrie. Had this stuck with the original basic story of a prostitute being a better person than the rest of the townsfolk, it would have been an interesting film, potentially a great one. As it is, it runs a lot of risks in the sense that it makes prostitute the clearly most sympathetic character in a movie from 1936. But once we dive into the soap opera world, it loses its way.

It would honestly be enough to simply see Carrie Snyder redeemed as a character, but to then have to deal with the issue of how she came by her children. Are the people of Crebillon so callous that a child can be whisked away after being adopted by relatives and none the wiser? Can a child on her way to adoptive parents be somehow intercepted with no consequence? These would make a far better and more interesting movie than the plot we actually ended up with.

Ah, well. For as sappy as this turns out to be, it’s worth seeing for the lovely Gladys George. She played a lot of small roles in big movies in her career, and it’s great to see what she was really capable of doing. It’s too bad that the plot didn’t do her any favors.

Why to watch Valiant is the Word for Carrie: Gladys George.
Why not to watch: It goes really, really far off the rails.

Posted by SJHoneywell at 2:30 PM

Email ThisBlogThis!Share to TwitterShare to FacebookShare to Pinterest
Labels: Best Actress, drama, Valiant is the Word for Carrie, Wesley Ruggles