By the Pricking of My Thumbs...

Film: Something Wicked This Way Comes
Format: DVD from Somonauk Public Library through interlibrary loan on the new portable. 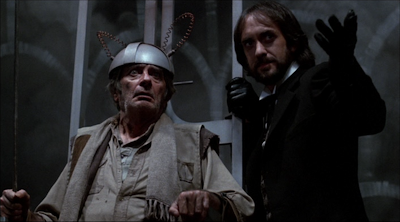 I am publicly not a religious person, but there are a few people who I refer to as “saints.” Musically, for instance, there is St. Warren of Zevon, and the trio of St. Bobs—Dylan, Geldof, and Mould. In the literary world, there is St. Ray Bradbury, who didn’t teach me to read, but taught me to love books and stories and to love dark tales. Bradbury was prolific, but few of his works have been successfully translated to the screen. There’s a part of me that will always love the Disney production of Something Wicked This Way Comes despite its many faults, because it so desperately tries to be everything that Bradbury wanted it to be.

The truth is that Bradbury’s prose doesn’t translate well to film. No one really speaks like a Bradbury character, and when they try, they just sound florid and strange. On the page, the work is evocative and beautiful, but when you actually hear someone speak his words, it simply doesn’t sound like a real person. That’s even true of this adaptation, both despite and because of the fact that Bradbury did the adaptation himself.

It’s rare that I am familiar with the source material of a movie. I’ve read my share of books, of course, but most of my reading these days is non-fiction, and since my job is reading, I don’t tend to do a lot for pleasure. But this is a book I know backwards and forwards. I’ve read it at least half a dozen times, probably more. It’s a book that is indelibly connected to my own youth, just as most of Bradbury’s work is.

Something Wicked This Way Comes is a piece of fantasy, as is true of most of Bradbury. His work tends to be classified as science fiction (having books called “The Martian Chronicles” and “R is for Rocket” will do that), but most of his writing is more fantastical than futuristic. It’s a dark fantasy, to be sure, involving a carnival made of dark wishes and evil dreams that appears one day in Green Town, Illinois (Bradbury’s version of his childhood memories of Waukegan) to prey on the innocent and not-so-innocent who live there.

The film is told through the eyes of two boys, old enough to be afraid of what might happen and also old enough to both want to stay young and to desperately want to be adults. Will (Vidal Peterson) and Jim (Shawn Carson) live next door to each other, and were born a mere two minutes apart, Will born a minute before midnight on October 30 and Jim a minute after midnight on Halloween. Jim is desperate to be older, both older than Will and older in general, which makes him a particular target of a carnival that grants wishes in ways that ultimately hurt and destroy the one who makes the wish.

We see some of these wishes granted. The town barber (Richard Davalos) dreams of exotic women, and has this wish fulfilled by the carnival temporarily. The local tobacconist (Jake Dengel) dreams of money, and his wishes are fulfilled as well. The barman (James Stacy), injured in an accident, dreams of his past athletic glory, and the local schoolmarm (Mary Grace Canfield) dreams of her lost youth and beauty. In each case, their dreams are temporarily fulfilled, but they are then taken, lost and destroyed by the Autumn People, as Charles Halloway calls them.

While much of the cast is unknown, there are some giants here. Will’s father, the town librarian and ultimately as much a main character as both Jim and Will is played by Jason Robards in a truly lovely performance. Jim’s mother, much underused, is played by Diane Ladd. The carnival is run by a man named Dark, played with menace by Jonathan Pryce in one of my favorite of his performances (and one of his first on the big screen), served by many dark people but primarily by someone known as the Dust Witch, played by Pam Grier.

Of course, the book is better. It would have to be, if for no other reason than Bradbury is always better on the page than spoken. But there are some truly beautiful sequences in the film. The library sequence, where Dark confronts and then tempts Will’s father with his lost youth is a gorgeous sequence that is, up to the end, as good as the book. This is due to the menacing performance of Pryce and the sympathetic work of Robards. The final ride on the merry-go-round—riding forward ages the rider a year for every revolution; riding backward does the reverse—is terrifying in its own way.

But…but the effects don’t hold up and weren’t that great in 1983. But there are changes made to the story that seem to have been made for no real reason except to simply make those changes. Characters are compressed or are used in ways here that they don’t appear in the books. Even the name of the carnival—Dark’s Pandemonium Carnival—has become lessened from the book’s incarnation of Cooger and Dark’s Pandemonium Shadow Show. That aging merry-go-round plays The Blue Danube in the movie; it plays the Funeral March in the book, playing it backwards (away from the grave) when it runs in reverse.

I love this movie for sentimental reasons, but I want to love it more than I do. I want it to be better than it is but know that it probably can’t be. The closest we’ll get is this, or perhaps the short-running HBO series “Carnivale,” which clearly took some inspiration from St. Ray. Then again, maybe someday Guillermo del Toro will get hold of this. If anyone could, he’s the one who could really make this work.

Why to watch Something Wicked This Way Comes: Because its prose is gorgeous.
Why not to watch: Despite its provenance, it can’t hold a candle to the source material.