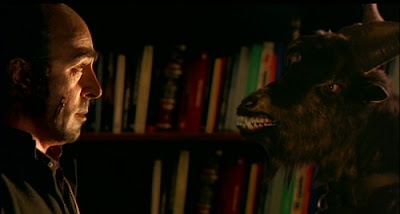 I love it when a movie has a completely insane premise but sticks with it completely, continually doubling down until we get to the end. That’s absolutely the case with The Day of the Beast, better known as El Dia de la Bestia. This is much more a black comedy than it is a horror movie, a sort of comedy of errors where everything that happens is horroresque, painful, and darkly funny. It also concerns the apocalypse and the birth of the Antichrist, so there’s plenty of comedy there, too.

We’re going to start with a Basque priest named Angel Berriartua (Alex Angulo). Father Angel has discovered a code in an apocalyptic text. He has determined that the text is actually a code that leads to a number. That number, translated into days, reveals the birthdate of the Antichrist, which happens to be Christmas Eve, 1995. Father Angel determines that his only course of action is to sell his soul to Satan, find the location of the birth (he has narrowed it down to somewhere in Madrid), and murder the Antichrist, saving the world even if it means his own soul.

In Madrid, Father Angel starts committing acts of evil, stealing the wallet of a dying man, pushing over a street performer, and more. He finds himself in a record store where he meets death metal fan Jose Maria (Santiago Segura). Jose suggests the priest listen to some death metal and suggests that he go to his mother’s boarding house.

Eventually, Father Angel confides in Jose about what I happening, and the two determine to get help from Cavan (Armando de Razza), a television performer who is part psychic, part magician, and part talk show host on occult topics. Eventually, they do track down Cavan and force their way into his apartment, eventually performing a ritual to summon Satan for the priest. It sort of works, but since it also involves them taking massive amounts of LSD, the arrival of a goat that walks on two legs is certainly interesting, especially when it is revealed that this emissary of Satan is not fooled by what the priest is doing.

Of course we’re eventually going to get to the Antichrist, but there’s going to be murder, mayhem, and all sorts of destruction getting there. It’s going to be completely ridiculous, of course, but the movie is absolutely going to play it as straight as possible. Part of the reason that El Dia de la Bestia works as a comedy is that the people in it don’t realize that they are in a comedy.

The Day of the Beast works for a lot of reasons, but the main one is that it plays it straight. If you take out all of the dark comedy here, the painful slapstick, the fact that Jose’s grandfather (Pololo) walks around the house in literally just an unbuttoned shirt, this is a movie that is legitimately about the end of the world and three men fighting desperately to do what they must to save it. There’s real malice here, and while there is comedy here, there is tragedy as well. There is real evil here beyond the presence of the Antichrist. A few tweaks and The Day of the Beast is a legitimate straight horror movie.

In fact, the biggest knock I have here is that the effects really don’t hold up. There are only a couple of effects shots in the film, but they very much look their age. The hellish sky is obviously 1990s-computer generated and the characters clearly green screened in front of it. But still, you come with the technology you have.

Oddly, the movie this reminds me of the most is The Frighteners. This has nothing to do with the actual content of the film, but with the way the story progresses. Both films are stories of two halves, or rather two sections. In both, the first half or so is clearly comedy with horror overtones. Also in both, the second half is clearly horror with a slightly comedic coda. I just wish this one didn’t end on such a bleak note.

Still, this was a great deal of fun, and I’m glad I saw it. I’d recommend this to anyone, and, since it takes place on Christmas Eve, it certainly counts as a Christmas movie.

Why to watch The Day of the Beast: It completely buys into its own insane premise.
Why not to watch: The ending is kind of a downer for a horror comedy.