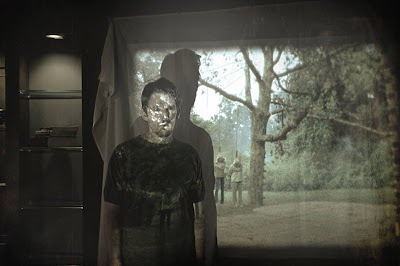 There are plenty of subgenres of horror movie that I am lukewarm at best on. I don’t love found footage, for instance, and I’m always a little suspect of anthology films. By far my least favorite subgenre of horror movie is what I’m going to call “stupid white people.” This is a varied genre that contains entries from all over the horror spectrum but has in common really stupid white people who act like idiots until they die. The family in The Amityville Horror, for instance, decides to stay even though the walls are bleeding. The couple in Paranormal Activity are happy to hang out and even taunt the demon until the movie ends. And now we get to add Sinister to that genre. (And for the record, Poltergeist doesn’t qualify—Carol Ann gets sucked into the TV early on, and they stay because they don’t want to abandon their daughter.)

Our stupid white people for Sinister will be the Oswalt family, headed by Ellison Oswalt (Ethan Hawke), renowned true crime author. As the film opens, after we witness a very disturbing video of a mass murder, we see the Oswalt family moving into a new house. Ellison is confronted by the local sheriff (Fred Thompson), and it’s soon apparent that he’s not a favorite of the police. It turns out that the book that made him famous was not charitable to the police in the murder case, and so many a local officer around the country is not a fan of the work of Ellison Oswalt.

It’s soon evident that Ellison is investigating the murder that we saw in the opening—a family of four all hanged at once from a tree in the back yard. We also learn that Ellison has moved the family—wife Tracy (Juliet Rylance), son Trevor (Michael Hall D’Addario), and daughter Ashley (Clare Foley)—not down the street from the murder, but literally into the same house.

Things get weird right away. Trevor, who has experienced night terrors in the past, starts experiencing them again in spades. Exploring the house, Ellison discovers a bunch of old 8mm films in the attic. It turns out that these are films of the family that lived in the house previously, and includes a film of the actual murder. We also learn that the entire family was not killed—there was a young daughter who vanished and was not hanged with the rest of the family.

You can see where this is going right? Well, maybe not yet. Ellison spends his time researching the murders, getting some help from a local deputy (James Ransone). Why? Because in the box of old films, Ellison finds other home movies of other families that have also been killed in mass events. People are tied to pool furniture and dragged into a swimming pool, burned alive in a car, have their throats slit, and in one rather inventive murder sequence, thrown out on the lawn and run over with the mower.

And, of course, while Ellison investigates what might be happening, they stay in the house. They stay even though there are clearly paranormal events happening. They stay even when there is no good explanation for why this house would have the films of mass family murders that occurred decades previous in different states. They stay. And, over the course of the investigate, Ellison learns something important. All of the murders have a series of connections. In all of them, the entire family is killed with the exception of one person. That one exception is a child, who disappears from the crime scene. And, the big one is this: all of the families are linked by houses. The second murder scene is of a family that lived in the house of the first victims and then moved. The third victims lived in the second victims’ house and then moved. And, of course, Ellison has moved his family into the house of the latest victims, knowing that in each case, the family was killed right after they moved from the murder house to a new one. So naturally, he moves his family then. Not when his daughter is drawing pictures of the missing girl on the wall. Not when his son is sleepwalking and having night terrors outside. Not when it threatens his marriage. Then.

There are a few things that Sinister does well. One is an uncredited appearance in a couple of scenes by Vincent D’Onofrio as a professor at a nearby college. Professor Jonas tells Ellison all about the strange symbols he sees in the videos. These are the symbol of an ancient deity named Bughuul (Nick King), who, according to legend, would kill entire families except for one child, who he would capture and then consume the soul of over time. The connection to what is happening here is applied with a mallet for the benefit of the audience, but of course Ellison is a stupid white person, and doesn’t see how that might affect him and his family, which includes two kids.

Beyond that, Bughuul is pretty cool. It’s a good look for a monster.

Ultimately, though, Sinister is the horror movie equivalent of someone being told that every time a particular box is opened, the person who opens the box is shot in the face, and having the protagonist think, “I wonder what’s in that box. I think I’ll open it!” without having the consciousness or self-awareness to realize that they, too qualify as a “someone” in this instance.

I hate stupid white people horror movies. I figure they all deserve to be dead.

Why to watch Sinister: Cool monster.
Why not to watch: These people are dumb enough to deserve being killed.

Posted by SJHoneywell at 6:46 PM