Miss Jackson if You're Nasty 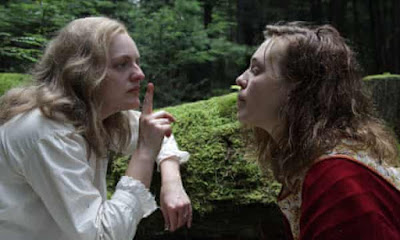 When I watched The Invisible Man earlier this year, I said that Elisabeth Moss should be nominated for an Oscar. Having seen Her Smell this year, I think Moss was snubbed a couple of years ago for that performance. And now, with Shirley, I think I’ve seen the performance that gets her the nomination she’s deserved for some time. Moss is the title character of Shirley, playing mercurial author Shirley Jackson, but it could be argued that she’s not really the main character of this film. Regardless, she haunts every frame of it, and any acclaim she has received for it is absolutely deserved.

We start not with Jackson but with Fred and Rose Nemser (Logan Lerman and Odessa Young) heading by train to Vermont. Fred has taken a job as a lecturer, working with Stanley Hyman (Michael Stuhlbarg), who happens to be married to Shirley Jackson (Moss). Fred and Rose are going to stay with the couple until they find their own place. What they soon discover is that Stanley and Shirley have a contentious at best relationship. Shirley is antagonistic evidently to everyone, and while Stanley seems to take this as a joke, it’s clear that he bites back just as hard.

What we also learn is that Shirley is almost an invalid, spending days in bed, drinking too much and possibly suffering from agoraphobia. Rose, a student but currently taking a break because of a pregnancy, finds herself more or less relegated to being Shirley’s keeper and maid. Shirley is initially antagonistic, but eventually comes to like Rose. The two eventually become very flirtatious with each other, especially as Shirley starts to depend on Rose more and more as she begins working on a new book about a missing young woman.

Other things become evident as well. Fred and Shirley’s marriage appears to be one designed to keep Shirley alive and writing. They seem to care for each other on some level, but Fred is promiscuous with his students. He’s also ridiculously jealous of his position and works to destroy Fred’s confidence and his budding career.

In many ways, Shirley plays like an even more vitriolic version of Who’s Afraid of Virginia Woolf?

It’s well cast. Michael Stuhlbarg, who was in three of the nine Best Picture nominees from 2017 honestly deserves a Best Supporting Actor nomination for this, and he might finally get one. I’m also impressed with the work of Odessa Young, who commits fully to the role of Rose. But it’s Moss who commands the screen the entire time she is on it and even when she isn’t. Moss’s Shirley Jackson controls the entire film, mostly due to her vicious and sardonic portrayal.

The thing about it is this, though--Shirley as a script and a movie doesn’t like Shirley Jackson. It might well think she was a brilliant and visionary author, but it doesn’t really like her. It also doesn’t like Stanley Hyman, or Fred Nemser. It may have a little fondness for Rose and the film gives her the closest thing it has to an arc of character development, but it’s singularly unpleasant to her, and might not like her very much either.

That makes Shirley a hard movie to like. It’s a film that is easy to respect and very much worth watching, but because it genuinely seems to dislike its subject matter, it’s almost spiteful, wanting to be unpleasant and disliked. In that respect, it’s rather masterful—it’s very good at being disagreeable, much like its main subject.

Here’s the thing, though. I have no idea of Shirley Jackson was actually this unpleasant and cruel. What I do know is that I hate this as a trope. So often in media, people who are extraordinarily talented or smart are depicted as cruel, mean, and vindictive. Smart people, we are told, are unapproachable, rude, and more than willing to use their intelligence not just to solve problems but to show other people how terrible and stupid they are. Geniuses are unrelatable and unlikable. The result of this is that many people who are unlikable have decided that this must mean they are also geniuses. Shirley adds to that stupid idea, and I sincerely wish it hadn’t.

Still, you should watch it for Moss, because she genuinely deserves a great deal of acclaim, and has for several years.

Why to watch Shirley: Elisabeth Moss is the best actor of any gender working.
Why not to watch: This film genuinely dislikes its subject and pretty much every character in the film.