This is Why I Ask for Charitable Donations... 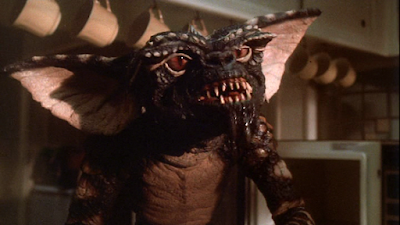 Everyone has holes in their viewing history. There are a few movies I’ve never seen that it feels like everyone else on the planet has watched, and I’m not just talking about recent releases, since I’m always a year or so behind the curve. No, I mean movies like Gremlins, which I had never seen until just now. It’s interesting to see this kind of film this late in the game, especially when it’s such a beloved film. I can see exactly why people love it, but I can also see all of the inherent problems with it that its audience missed as kids and is blind to now.

The obvious issue, of course, is that Gremlins evidently started life as a much more vicious film and much more clearly geared toward horror. In fact, it is rumored that the original cut of the film was much more violent and graphic, and would have clearly been given an R-rating. As it stands, it’s one of the movies that made the requirement for the PG-13 rating necessary. It’s not dark or harsh enough to warrant an R, but it’s definitely got elements in it that make it harsher than PG.

All of this is fine—plenty of movies move from one rating level to another based on what the studio wants to do, but for a movie like Gremlins, it dramatically affects how the film is going to be perceived. There are some very dark moments here, including a few fairly gruesome deaths, either partially shown or suggested. At the same time, there is some very obvious comic relief of a very predictable nature. A couple of the characters are directly out of central casting, clichés so significant that I’m surprised they made it past the first edit of a film that was once possibly going to be rated R.

Anyway, chances are good that you know the basic story. Hapless inventor Randall Peltzer (Hoyt Axton) is out Christmas shopping in Chinatown (a vague Chinatown—could be Chicago, could be San Francisco, whatever) when he is dragged into a store by a young boy (John Louie). Here he encounters Mr. Wing (Keye Luke, best known as the blind Master from the “Kung Fu” television show). This is also where he first encounters a mogwai (voiced by Howie Mandel), a little furry creature that is, he is told, not for sale. However, Mr. Wing’s grandson decides to sell the creature to Peltzer, giving him three warnings:

1) Don’t bring the creature out into light. Bright lights harm it, and sunlight will kill it.
2) Don’t get it wet. Water causes the creature to reproduce.
3) Never, ever feed it after midnight.

Peltzer takes the critter home and gives it to his son, Billy (Zach Galligan), who works at the local bank and is older than you’d expect for a main character in this kind of movie. Older in the sense that he’s old enough to drink, since he’s seen in a local bar a couple of times. He’s also kind of working on a relationship with fellow bank worker Kate (Phoebe Cates), which is perfectly understandable based on mid-1980s Phoebe Cates. Billy, like his dad, is a bit of a loser. Randall Peltzer is an inventor in the sense that Hitler was a painter. Billy is more or less kind of hapless. Bad things seem to befall him.

Regardless, eventually all of the taboos are going to be broken, just as you knew they would be. Neighbor kid Pete (Corey Feldman) splashes the mogwai, named Gizmo, with water, spawning some new, much more aggressive and ornery mogwai. These, lead by one names Stripe, connive to have Billy feed them after dark, which causes them to cocoon and emerge as much more malicious, reptilian creatures. These darker gremlins start causing mayhem around the town, including a few rather brutal deaths. And so the race is on for the Peltzers and Kate to eliminate the threat while the gremlins cause mayhem and death to the town.

And this is why I say the film is tonally weird. There are clear clichéd comedy moments. Randall Peltzer’s inventions always fail. Always. They fail spectacularly in a way that someone inventing a product would never have happen when offering a demonstration. This is played for comedy, but because it’s such a cliché, it never really works. The gremlins themselves are also half comedic and half pure evil. Throughout the film, they behave in ways that are absolutely brutal, slaughtering people mercilessly. But they also decide to hang out at the local bar and force Kate to serve them while they play video games and, in one kind of inexplicable moment, don a trench coat and flash her. Are they funny? Are they killers? Kinda both, and unlike Freddy Kruger, they don’t have the sass to really pull this off.

In fact, the tone of Gremlins can be summed up in the story that Kate tells about why she hates Christmas. This is a minor spoiler in the sense that it happens near the end of the movie but isn’t really connected much to the plot. Kate tells Billy that she hates Christmas because her father died on Christmas. Specifically, he tried to climb down the chimney on Christmas Eve to surprise her with gifts, got stuck, and died. They didn’t find him until they noticed the smell, and the fire department came and pulled her dead father out of the chimney. Is that funny? Is it horrifying? Is it both? Does the film even know?

Honestly, though, what gets me about the film is just how much it leaves unanswered. Judge Reinhold and Polly Holliday appear initially as the film’s two main villains. Reinhold plays Billy’s direct supervisor at the bank, and he’s more or less kind of a dick…but he doesn’t really appear in the film after the first act. Polly Holliday is the local miser threatening to evict people at Christmas, and while she gets her comeuppance at the hands of the gremlins, there’s no closure on all of the people whose lives she has threatened. One woman in particular is shown to us begging for her family to be allowed to keep the house a little longer, and she’s just…forgotten. Even Billy’s mom Lynn (Frances Lee McCain) is set up, gets a great scene, and ignored. Lynn manages to take down a handful of gremlins attacking her, she gets injured and rescued by Billy, and then she’s just done. She deserved better, because she kicks a lot of ass in that scene.

So, ultimately, Gremlins is a mixed bag. Would I love it more if I had seen it in 1984? Almost certainly. Oh, well.

Why to watch Gremlins: It’s considered a classic for a reason.
Why not to watch: It has no idea of whether or not it’s serious or funny.