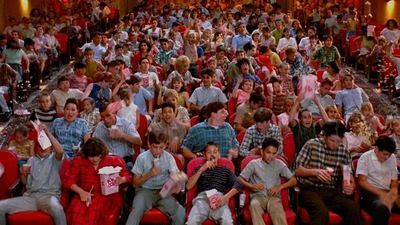 Year 11 and still going strong, or at least limping along.

It seems that even with a pandemic I can’t quite hit that 400 movies in a year goal. I came closer this year than the previous two, however. As I write this, I stand at 395 movies on the year with a little bit of time left to get there, but I think it’s unlikely.

This has, of course, been a terrible year in almost every aspect. My father and one of my sisters have dealt with cancer, one of my brothers spent a week or so in the hospital with COVID, my other brother was hit by a car while on his bike, my niece shattered her knee falling off a ladder, and my wife was out of work for seven months. But we’ve made it through—everyone survived, and my wife is employed once again. Still, I’m happy to see this year in the rearview.

As lousy as this year was, I hit some milestones. Until the new Oscar nominations are announced in March, I’m done with the Oscars. I’ve also got only 11 more Oscar Got It Wrong! posts before I’m complete. There are also only two more movies left on the latest 1001 Movies list. So, while I didn’t hit all the milestones, I got very close to many.

So what’s next? Horror movies, certainly—there’s a lot remaining on the They Shoot Zombies list. And, I’ll be tackling a lot more of the suggested movies and likely reviewing a lot of them in full.

In other words, I’m not done yet. Stay tuned!

Posted by SJHoneywell at 1:56 PM