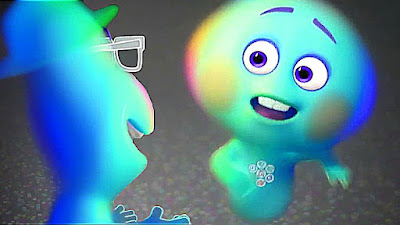 Pixar makes interesting choices with their films. We’re not going to see Oscar nominations until March in 2021, but that gives me a lot more time to find potential nominees early. With two Pixar movies this year, it’s pretty likely one or both will make it in. Soul, released at the tail end of 2020, is almost certainly going to be a nomination (and I think Onward is likely as well). Soul, though, is interesting because it might be the first Pixar movie that is legitimately made for adults.

Soul is the story of Joe Gardner (Jamie Foxx), a musician who, while dreaming about gigging professionally while marking time teaching middle school band part time. He’s clearly not happy teaching band, and when he’s told that he’s being given the opportunity to work the job full-time, he’s not really sure how to react. Sure, a regular paycheck and benefits are important, but it’s not really what he wants. It is, however, what his mother wants for him and what she has always wanted for him.

While he is attempting to determine what he is going to do, one of his former students (voiced by Questlove) offers him the chance of a lifetime. This student is now the drummer for the Dorothea Williams Quartet, and they are in need of a pianist for the evening. Joe shows up for the audition and loses himself in playing, which impresses Dorothea (Angela Bassett) and lands him the gig. Joe is so excited, that as he is walking home, he falls into an open manhole.

Naturally, this sends Joe toward the Great Beyond, but he decides he doesn’t want to go. Rather than riding peacefully up the conveyor belt to whatever lies behind, Joe instead runs the other way and finds himself in the Great Before, which is where souls start out. Soul counselors, all of whom call themselves Jerry, help guide unborn souls to fulfill the necessary requirements for starting life on Earth, including finding their “spark,” which is initially interpreted as more or less their raison d’etre. Some souls are enlisted as guides—Joe is mistaken for one of these, and is assigned 22 (Tina Fey), a soul who has essentially refused to find a spark and thus has refused to go to Earth.

Soul is very much about making a mythology as much as it is about the plight of Joe Gardner. What we learn about Joe is that his life has some meaning for him, but not any real depth. He’s never really accomplished anything that he wants to accomplish. He’s been an also-ran his entire life. 22 finds him fascinating both despite and because of this—his life is so completely ordinary, but he’s desperate to return to it. What we learn as Joe goes, well, soul searching, is that the various souls in the Great Before are given their personalities through a series of experiences. When people are in “the zone,” their souls leave their bodies and are transported to a mystical realm nearby the Great Before. And also, when someone loses their way, they become lost souls. Much of this we learn from Moonwind (Graham Norton), a man who transports himself through sign-twirling and spends his time in the zone rescuing lost souls.

Eventually 22 and Joe get to Earth thanks to Moonwind, but 22 ends up in Joe’s body while Joe ends up in the body of a therapy cat. Now, Joe needs to get 22 oriented to Earth and they need to find Moonwind to get him exorcised and back into his own body. And, hot on their trail, is Terry (Rachel House), an accountant who has discovered that the count is off because of Joe’s refusal to enter the Great Beyond.

There’s a great deal here that is exactly what is expected from Pixar. The art is interesting (see the picture above for the soul blobs). I particularly liked the look of the counsellors, who are somewhere between a Picasso and a Miro.

What I don’t love is the mythology. I have real problems with a lot of what is going on here. First, I’m not a fan of the concept that our personalities are handed to us like a hamburger at a McDonald’s. Significantly, this seems to discount the idea of actual life experiences affecting our personalities in significant ways. I can point to specific events in my life that have shaped me, but Soul would more or less suggest that our life experiences don’t actually affect our personalities more than shifting them or tweaking them. If you leave the Great Before as a malignant narcissist, that’s what you’re going to be. It’s an odd choice to essentially claim strict materialism and a lack of free will.

And so, we have a case where I don’t like this as much as I’m supposed to. The story is good and I like the art, but philosophically, I think there are real issues here, and those issues are problematic enough to give me serious concerns.

Why to watch Soul: It’s an interesting mythology.
Why not to watch: The theology is terrible.