Hair of the Dog? 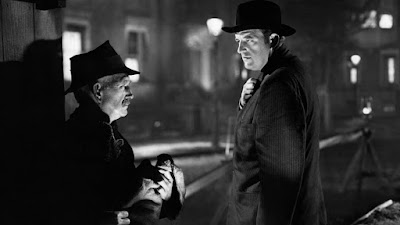 There are plenty of sand and tragic stories in Hollywood. Tragic stories recently would include actors like Chadwick Boseman, taken by terrible illness and Anton Yelchin, killed in a freak accident. Heath Ledger and Brittany Murphy would rank high. Of all the tragic stories, that of Laird Cregar might be the most tragic. Trapped in a hulking frame of 6’3” and more than 300 pounds, Cregar had something of the soul of a poet. Upset at the possibility of being forever cast in the role of heavies, Cregar wanted to be cast in romantic leads.

Desperate to be seen as a true leading man instead of a villain, Cregar went on a crash diet that involved, among other things, massive amphetamine use. For Hangover Square, Cregar more or less needed to be filmed in order because of his massive weight loss. Additionally, the amphetamine use caused him to become erratic as he dropped to 200 pounds. His heart couldn’t take it, and while his final role—in Hangover Square--had him still in some respects the role of the heavy, he finally got some of the romantic moments he wanted. And it killed him.

Just past the turn of the last century, London composer George Harvey Bone (Cregar) endures fugue states where he loses all track of himself, essentially temporarily becoming a Mr. Hyde to his more cultured personality. In this state as the movie starts, we see him kill a shopkeeper and then set the shop on fire. He has no memory of this, but when he comes to in the presence of his girlfriend Barbara (Faye Marlowe), he finds a knife in his pocket, and blood on his coat.

The two head to Scotland Yard to speak to Dr. Allan Middleton (George Sanders). George tells him that he has these moments of amnesia (sometimes entire days) when he is under stress and hears discordant sounds. It is recommended that he try to relax more and get out among everyday people. In an attempt to do so, George heads to a club and hears a singer named Netta (Linda Darnell). He immediately becomes smitten with her despite her middling talent. Netta, an opportunist, fakes affection for him so that he will write songs for her.

You can see where this is going, right? Netta is almost certainly doomed, and Barbara might be as well as soon as George figures out what is really going on and enters into one of his fugue states. Meanwhile, Dr. Middleton seems more than passingly interested in Barbara, and that might be a problem as well. And of course, once we have established that George’s problem is too much stress and overwork, he’s going to be pushed to the limit by Netta and by Barbara, the first wanting more songs from him and the second wanting him to finish his concerto.

Hangover Square is noir-like in the sense that it has a lot of the themes of a traditional film noir, but the setting is very different. This isn’t the typical criminal underworld, but at least part in high society London. George’s romancing of Netta (or Netta’s fleecing of George, depending on your perspective) happens in fancy restaurants and at philharmonic shows. But everything else is right in line with the style—it’s hard not to consider this a noir in everything but era.

The film is very much anchored by the twin performances of Cregar and Darnell. Cregar, for all of his dreams of playing a romantic lead rather than being typecast, really did have the goods. Had he been blessed with movie star good looks and a more fit physique, we’d have been talking about a career that would have spanned years. While not my favorite of his roles (that would easily be his sardonic and masterfully wicked turn in Heaven Can Wait), it’s a damn good one, and he plays it well. The same is true for Linda Darnell, who excels as the film’s equivalent of a femme fatale, doing everything she can to get everything she can from the hapless George.

If there’s a disappointment, though, it’s George Sanders. To be fair, it’s not his fault. The film gives him nothing to do. He’s in an early scene or two, then absent for a long time before he shows up again at the end. His odd flirting with Barbara is possibly there to add more stress to George, but this never goes anywhere outside of the first act. He could be a much bigger player, and with a film this short, adding a few scenes to develop that character would have been worthwhile.

There are some good moments here, though. I’d love to say that Laird Cregar’s last film was the one he should have gone out on, but it’s not. It’s a good one, but he deserved better than this, and we deserved another 30 or 40 years of his work.

As a final note, I feel like I should mention the Bernard Herrmann score. Herrmann's work, of course, was always great, but this was early in his film days. However, there is a brillance here that is undeniable--the concerto that is performed in part at the end of the film is damn good. If that were the only music performed, it would be noteworthy...but Herrmann was better than that.

Why to watch Hangover Square: It plays with interesting ideas of insanity.
Why not to watch: Laird Cregar literally died for this.