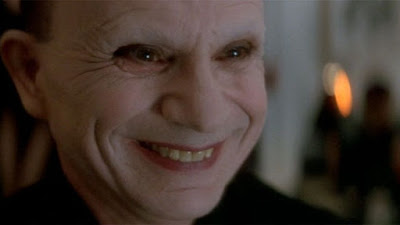 What are you going to get when David Lynch writes and directs a neo-noir? Well, you might get Blue Velvet, a film I find I have been able to watch exactly once every 10 years or so and not more. You might also get Lost Highway, a film that tells a story but also seems to go out of its way to not make any sense to anyone.

Fred Madison (Bill Pullman) is a jazz saxophonist who receives a weird message on his intercom one day. Soon after, his wife Renee (Patricia Arquette) receives a video tape that turns out to be of their house. Future video tapes show someone entering their house and filming them sleeping. Later on, Fred meets a strange pale man (Robert Blake, before his murder trial) who tells him that they’ve already met and that he is currently at Fred’s house. Fred calls his house to check, and the man standing in front of him answers the phone. Ultimately, Fred gets a video tape that he watches by himself. It shows him murdering his wife, and before we can figure out what is happening, Fred is in custody, then prison, and then on death row.

All of this is weird, but makes a certain amount of narrative sense. And this is exactly when it all goes to hell in terms of that narrative. One day a guard looks in on Fred in his cell and Fred isn’t there. Instead, it’s an auto mechanic named Pete Dayton (Balthazar Getty), who is naturally released immediately because he’s not Fred Madison. We follow him around for some time and his adventures with Mr. Eddy (Robert Loggia), who is also apparently a porn producer named Dick Laurent. Pete is also Alice Wakefield (also played by Patricia Arquette), who is also Mr. Eddy’s girlfriend, of whom he is very protective.

The truth is that I think I’ve made some sense of Lost Highway despite the fact that it feels like two completely different movies that have been glued together in the middle. To discuss this, though, I need a spoiler tag.

I think what is happening here is something very similar to what happens in a film like Carnival of Souls. We know from the first part of the movie that Fred evidently killed his wife and winds up on death row. My guess is that the moment Pete Dayton shows up is more or less a fever dream or hallucination. Everything that is Pete Dayton is just Fred Madison having a psychotic break before his execution.

I admit that this doesn’t track perfectly—at the end of the film, it’s he who gives the cryptic message to himself at the start of the film about someone he doesn’t know at the start of the film. But everything else here tracks. Why else would Pete’s girlfriend look exactly like Fred’s wife? Why else would the woman who put him on death row be a woman who will get him killed if he stays involved with her? Why else would he, at the end of the film as he drives away from the police, having turned back into Fred Madison, look like he’s screaming and shaking, much as if he’d been put in the electric chair?

Did I like Lost Highway? I think I did. I had a conversation with a friend recently about how much he likes experimental films more than I do. While that might be true in general, I’m not someone who eschews experimental films as a rule. What I’ve found is that if I have something I can actually latch onto, something that really connects with me or that helps me interpret the film, I tend to find more to like. If it’s just a bunch of images, I’m not much of a fan. With Lost Highway, I think I’ve found something to hang my hat on, and that really helps.