Lords and Ladies of the Flies 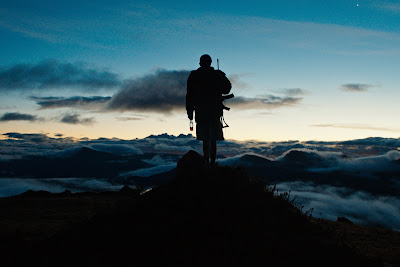 The last set of additions to the 1001 Movies list felt a little non-English heavy this year, but that’s probably a good thing. For a list of this size, there are a lot of significant gaps. It’s still pretty West-centric in a lot of ways. There are only a couple of Bollywood movies on it, for instance, and it’s still unforgivable that there’s not a single instance of Ray Harryhausen’s work to be seen. Anyway, Monos is a rarity on the List in that it is Colombian. There aren’t a lot of South American movies that made it to canonization (at least this version of canonization), which makes this one particularly interesting.

That said, this is not a happy or fun film. This is a film about child soldiers fighting in an unknown battle for one side or another of a conflict. We are given remarkably little information, which is a part of the point. Monos happens without a great deal of context. We have no idea what the conflict is, although it is likely that it is based on the Colombian conflict. A group of young people, ranging in age from probably 12 to about 16 known exclusively by nicknames are camped in the mountains where they are trained as a paramilitary group by a man referred to as the Messenger (Wilson Salazar).

The kids, known as Monos (hence the title), have two charges. The first is a cow named Shakira that they are to take care of and are to use the milk for nutrition. Their other charge is much more serious, an American engineer named Sara Watson (Julianne Nicholson) that is being held as a hostage. The Monos are to watch over the cow and protect Sara, who they call Doctora, and kill her if a serious attempt is made to rescue her. While the Messenger is there, two of the kids, Wolf (Julian Geraldo) and Lady (Karen Quintero) ask for permission to begin a relationship.

Things go awry immediately. Wolf and Lady consummate their relationship, and the other kids celebrate. One of them, Dog (Paul Cubides), accidentally shoots Shakira in his celebration. Faced with having to take the blame as the leader, Wolf kills himself. When the Messenger returns, he puts Bigfoot (Moises Arias) in charge of the group. After the base is attacked and successfully defended, the kids are sent to a new location, this time in the jungle. It is here that things really go to hell. Sara makes escape attempts, Bigfoot destroys the radio and claims the group is now independent, and the kids become more and more feral as time goes on.

Monos isn’t really traveling over any new ground here. There’s a great deal here from The Lord of the Flies (there’s even a pig’s head on a spike at one point) in the sense that we are looking at a group of uncivilized kids descending rapidly into chaos and madness and violence. There’s a great deal of the last hour or so of Apocalypse Now here as well. The kids are at times almost indistinguishable from the compound and followers of Col. Kurtz. This is very much hinted at in the name—“monos” translates from Spanish as “monkeys.”

I’ve classifying Monos as a war film, but it’s honestly more war-adjacent. There is really only one moment of anything like combat here, and it’s pretty quick. The bulk of the movie is more or less the day-to-day lives of these kids trying to be adults and soldiers in a world that barely sees them as human. While we can guess the conflict in question as well as the side that the kids are on, we can’t honestly be sure. That makes the vagueness of the actual politics and the side these kids are on ultimately unimportant. We don’t need to know, because it’s not about that. It’s about the fact that these are kids—high school age at the oldest and middle school age in many cases—and they are walking around with machine guns and machetes and playing at war.

Monos is not a happy film, but it is also not an ordeal. Much of it is exploring the dichotomy of the world it lives in. The jungle we spend the second half of the movie in is beautiful, but also horrifying and deadly. The kids, indistinguishable from each other initially soon become recognizable by their personalities. Smurf (Deibi Rueda), the youngest and smallest of the group; Boom Boom (Sneider Castro), the one who most wants to be a soldier; Swede (Laura Castrillon), aggressive and sexual; Rambo (Sofia Buenaventura), perhaps named ironically as the one most sensitive to the world around him. These are kids given real weapons and real responsibilities, and what happens is absolutely as bad and as much a descent into madness as you would imagine it to be.

Monos is worth your time. It won’t make you happy, but it will make you think.

Why to watch Monos: It’s mesmerizing.
Why not to watch: Like a lot of movies that are war adjacent, nothing good really happens to anyone.