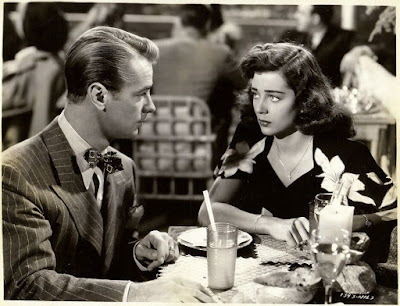 Before I get into the full discussion of Salty O’Rourke, I want to talk for a minute about libraries. I use a ton of them for this blog, and so I’m not going to speak ill of them, although I am frequently frustrated with them. My local library doesn’t have much of a DVD collection, but is happy to get DVDs from other libraries on their network, which means that they won’t get anything from WorldCat for me. One town to the north will get WorldCat items, but only if you are a resident of that town. The local major university will get WorldCat items from anywhere in the country, but only if you’re a student. A few weeks ago, I discovered another local library in a tiny little town to the east of me. And they will get WorldCat DVDs from any Illinois library. That fact is why I have Salty O’Rourke in my grubby mitts today.

In a real sense, I’ve been looking for Salty O’Rourke for about five years, and I’m lucky to have it now. On WorldCat, there are three libraries that have Salty O’Rourke as a lendable film; remember that I can only get movies from this one library and only from Illinois libraries. Two of the three listed libraries with this film are in Illinois. When it showed up, I knew this was one I’d be watching and reviewing immediately.

And for all of the time and effort it took to get this movie, what I have is one that I’m not sure I fully understand. I have no idea what this movie wants to be or if it knows what it wants to be. There are moments when this seems like it might be a comedy, but it’s clearly not. It feels like it kind of wants to be a romance, and it sort of is, although the romance doesn’t work. Is it a crime movie? Yes, but except at the start and the end, there’s very little crime here. It’s a story…and that’s about all I’ve got.

Salty O’Rourke (Alan Ladd) is a shady gambler currently on the hook to a mobster named Doc Baxter (Bruce Cabot) for $20,000, close to $300,000 by today’s standards. Salty claims that his partner went on the lam with the money, but wound up with a quartet of bullets in his cranium. Doc Baxter gives Salty and his trainer/partner/assistant Smitty (William Demarest) a month to come up with the money, or it’s curtains for them, too.

Needing a scheme, Salty pawns some of his jewelry for enough money to purchase a horse named Whipper. Whipper is a hell of a racer, but can’t be ridden by anyone but Johnny Cates (Stanley Clements). The problem with Johnny Cates is that he has essentially be barred from just about every track in the country. Salty and Smitty head to Mexico to hire him, and do so with the understanding that he will claim to be his 17-year-old brother, Timothy. Since Timothy is just 17, this means that Johnny has to spend the next five weeks in school with other jockeys. And this brings in apex of our love triangle, teacher Barbara Brooks (Gail Russell).

Johnny/Timothy falls afoul of Barbara immediately, which means that Salty has to go in and do what he can to get his jockey back in school. And, of course, sparks fly between the two. Much of the rest of the film is going to concern a couple of things. First, Salty does what he can to keep Barbara on his side, asking her to overlook the issues that his jockey has. Second, Johnny/Timothy decides that he wants to shack up with Barbara when his jockeying career is over, and while he’s crude, he’s at least sincere. Third, Salty and Smitty do what they can to keep Johnny from getting tossed out on his ear so that the can make enough money to pay back the debt. That’s pretty much it.

I don’t know what Salty O’Rourke wants to be, and I’m not sure it knows what it wants to be, either. The biggest issue it has, though, is that it contains a romance that simply doesn’t work. The failed romance between Johnny and Barbara works exactly as it should. He is infatuated with her and she is embarrassed and a bit shocked by his conduct.

The romance between Salty and Barbara doesn’t work at all. Salty is a step up from a criminal, a man who keeps a pistol in his pocket at all times and owes $20,000 to a criminal. Barbara is sweet and honest and upright, the sort of person who would be shocked and repulsed by Salty. In this case, she’s interested in him specifically because the plot demands it.

Gail Russell is the real reason to watch this. She wasn’t a great actress, but she tried hard and she was a unique beauty. She was also unsuited temperamentally for stardom. Severe stage fright sent her to the bottle, and she died of complications from alcoholism at the tender age of 36. If you can find this, watch it for her and for William Demarest, who never really got the sort of credit he deserved for being a constant bit player.

Why to watch Salty O’Rourke: Gail Russell was ethereal and taken from us too soon.
Why not to watch: It has no idea what it wants to be.