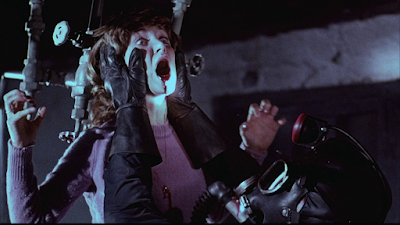 Ever since Halloween, there has been a standard model for the slasher film. Someone in the past did something terrible, and now it’s years afterwards and something bad connected to that original event is about to happen again. The bad thing that’s about to happen is going to be a series of murders, often with a distinctive weapon and often conducted by someone wearing a mask. That’s very much the basic story behind the 1981 version of My Bloody Valentine. The fact that this is a Canadian slasher isn’t going to make it any more polite.

Twenty years ago, in the town of Valentine Bluffs, there was an annual Valentine’s Day dance. That year, a couple of the mine foremen were so focused on going to the dance that they left with five men still in the mine below. A methane explosion trapped the five men, and when they were dug out, only a man named Harry Warden had survived. The length of Warden’s captivity forced him to resort to cannibalism, and this and the length of time he was trapped drove him insane. The next year on Valentine’s Day, Warden escaped captivity and murdered the two foremen, placing their hearts in candy boxes and leaving them at the dance hall.

So now, 20 years after the event, the town has decided to bring back the dance despite Warden’s warning that if any dance like that was ever held again, he would show up and start killing. But the dance is on, and most of the town’s younger crowd is excited for it. When Mayor Hanniger (Larry Reynolds) and town police chief Newby (Don Francks) receive a heart-shaped candy box with a human heart inside it (a souvenir from the film’s opening scene), they realize that the dance is a bad thing. The next day, town resident and laundromat owner Mabel (Patricia Hamilton) is found dead with her heart ripped out as well, and the dance is cancelled.

This doesn’t sit well with the younger crowd, though, who decide to hold their own party. Since most of the men in the town work in the mine, it’s decided to hold the party in the mine. As you might guess, this is clearly a bad idea, since all of the bad things surrounding Harry Warden happened at the mine, and since our killer has been dressed as a miner and his weapon of choice is a pickaxe. Like a typical slasher film, the bulk of our victims from this point forward will be young. Unlike the traditional slasher, though, these victims are going to be out of high school and are all working stiffs. It’s a large crowd (we’ll get plenty of victims—the film has a body count of 12). The three we’re going to be primarily interested in are Axel (Neil Affleck), T.J. (Paul Kelman), and Sarah (Lori Hallier). The reason for this is that this is our love triangle.

In most respects, My Bloody Valentine is a standard slasher. There are going to be a lot of kills, and we’ll get at least once instance with a couple running off to have sex at the party being killed in flagrante delicto. While a good number of the kills are going to come via pickaxe, there will be a couple that are much more creative, including a large pot of boiling water, a drill, and a shower head. Yes, a shower head.

What’s really interesting here is that My Bloody Valentine evidently required a huge number of cuts to avoid an X-rating (as this was before the time of NC-17). Today, the film would almost certainly past through the MPAA without required cuts, but the original vision of the film was much more violent and bloodier than the one available. In fact, most of the cuts have never been restored, despite the fact that there’s far worse on offer these days in a vast number of genre films.

My Bloody Valentine is not a great film by any stretch of the imagination, but it’s also not a terrible one. As far as slashers go, it sets up a nice backstory for what is about to happen. It also succeeds in a great look for the killer. It’s set up early in the film that the miners frequently go into the mine wearing gasmasks, so that’s the look we’re given here—a completely black outfit with a black gasmask. It has the added benefit of giving the killer’s breathing a very specific and disturbing sound.

This is not a film that’s going to win any awards, but I enjoyed it well enough. It’s a completely standard slasher in almost every respect, and there are perhaps too many people of whom we’re supposed to keep track, but the body count is solid, some of the deaths are pretty interesting, and the ending is just goofy enough to be memorable.

Why to watch My Bloody Valentine: Great look for the killer.
Why not to watch: It’s a pretty straightforward, bog-standard slasher.