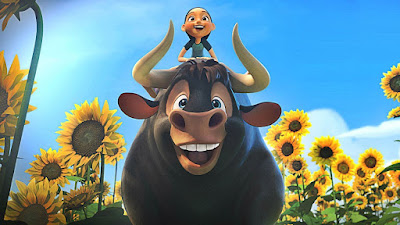 I don’t know why it seems like it’s taking me longer than usual to get through the 2017 Oscar winners than it has for other years in the past. That’s especially true for the animated feature nominees. I can’t say that I had a great deal of interest in Ferdinand going in. I’m familiar enough with the basic story, and I expected it would be tuned up for a modern audience with some modern jokes. And really, that’s what I got.

Ferdinand is based on “The Story of Ferdinand,” a tale of a bull who would rather smell flowers than fight a matador. Honestly, Ferdinand is a pretty easy character with whom to identify; I’d rather smell flowers than fight, too. What we’re going to get in the film that we don’t get in the movie is something much more clearly attacking what bullfighting is.

And really, that’s something very interesting for me. Bullfighting is a brutal and terrible sport, the sort of thing that I wonder why still exists. It seems so needlessly cruel, wanting to kill an animal for sport in front of a cheering crowd. To its credit, Ferdinand doesn’t really shy away from the reality of bullfighting. It becomes clear through the film that the bulls that face the matador end up as trophies on the wall. Those who don’t end up in the bullfighting ring end up instead at the meat packing plant. That’s an ugly reality, and I appreciate that the movie goes there.

The movie starts by introducing us to a number of young bulls, most of whom want to grow up to be in the bullfighting ring and a chance for glory. Young Ferdinand is different, wanting only to enjoy flowers and to not have to fight anyone. When Ferdinand’s father is chosen for a bullfight and doesn’t return, Ferdinand breaks out of the farm and hops onto a train. He gets off at the farm of Juan (Juanes) and his daughter Nina (Lily Day). Ferdinand is immediately accepted by Nina, less so by Nina’s dog Paco (Jerrod Carhmichael).

So for a few years, Ferdinand (John Cena) lives his best life, growing huge. One year, the flower festival in town starts up and Ferdinand at home. Try as he might, no one will believe he is harmless, but still, he wants to go. He does, and chaos ensues. In fact the chaos is so significant that he is eventually captured and shipped back to Casa del Toro where he was born and where his fellow calves from years earlier await his return.

All of those calves are now adults. Bones (Anthony Anderson), a little, scrawny bull calf, has grown up into a little, scrawny adult. Guapo (Peyton Manning) is a strong bull who looks the part, but who also suffers from terrible nerves any time someone might be looking at him. New to the group is Angus (David Tennant), a Scottish bull who doesn’t see well and Maquina (tim Nordquist), a cloned bull from a lab. Presiding over all of them is Ferdinand’s old bully Valiente (Bobby Cannavale), who is still convinced that Ferdinand is not much of a bull.

Ferdinand also encounters Lupe (Kate McKinnon), a goat whose job it is to calm the bulls. She’s not very good at it, though, and anyway, she wants to coach. We also meet hedgehogs Una (Gina Rodriguez) and Cuatro (Gabriel Iglesias) and their friend Dos (Daveed Diggs), a rat. The three initially attempt to steal from Ferdinand, but he allows them to drink his water, befriending the animals.

Anyway, the entire point of Ferdninand is that he is put into a world where violence seems to be the only choice he has, but he doesn’t like that choice and instead makes another. It’s significant that this is a film that is clearly against bullying and clearly against that sort of mob mentality. I appreciate that a great deal.

But the truth is that Ferdinand has exactly the plot that you assume it does. It doesn’t deviate in a single way from where you think the plot is going to go and where it actually goes. It’s a big disappointing. There are so many ways that this could be taken and criticized. There are so many places that the story could go and simply does not. In fact, the most obvious story here is the one against animal cruelty and using animals for sport, and the film doesn’t even really hit that very hard.

Ferdinand is a cute movie. I won’t disagree with this. But it’s also not anything that I haven’t already seen a couple of dozen times in other animated movies. It’s clear where this is going from the moment the plot starts to lay out. It could have been made much more complex and interesting by really hammering on the animal cruelty aspects of the film. Instead, it spends far too much time dealing with the people behind the voices, giving them good one-liners, and giving us a predictable movie.

Well, sure it’s predictable, you say. It’s a kiddie film. And while I agree with you that it is a film with a much younger intended audience, every kid in that audience is a more sophisticated viewer of media at their age than you or I was at that same age. This is not bad, but it’s also not great and it had the potential to be so much more.

Why to watch Ferdinand: It’s cute.
Why not to watch: There is not a single surprise here.