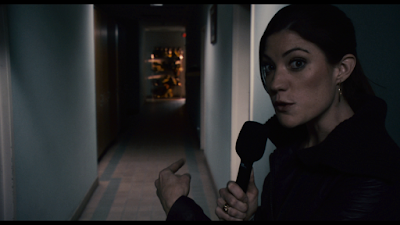 I don’t like the insta-remake trend that seems to be everywhere. In understand the desire to make a remake of a film, but when someone remakes a movie immediately after the original version, I wonder what the point is. It’s not like the technology or conventions of films have changed, and it’s unlikely that anything new is going to be brought to the story. Most of the time, the biggest change is the language; a movie in something other than English gets essentially remade in English. While the most egregious case of this is probably the American remake of the British Death at a Funeral, it’s hardly the only time when a film has been redone a year after the original with just a new crop of actors in a new language. That’s certainly the case with Quarantine, an American remake of [●REC] one year later.

If you’ve seen [●REC], there’s nothing new here except that you’ll no longer need to read subtitles and it’s about 10 minutes longer. Otherwise, if you’ve seen the one, you’ve seen them both, and [●REC] is the better movie. Still, if you can’t get enough of biological zombie-like monsters, found footage, and nausea-inducing shaky-cam, Quarantine is here for you.

I’m going to work under the assumption that you haven’t seen [●REC], though. If you have, you can skip this and the next two paragraphs. Angela Vidal (Jennifer Carpenter) is a reporter for a television magazine-style show. With her cameraman Scott Percival (Steve Harris), she is sent to do a feature on the Los Angeles fire department by shadowing a couple of fire fighters named Jake (Jay Hernandez) and Fletcher (Jonathon Scaech). After a few minutes of being introduced to the fire station, a call comes in and Angela and Scott hop into the truck.

This won’t be a fire call. What we have instead is an apartment building where an elderly woman was heard screaming in her apartment. When the fire fighters and police enter her apartment to find out what is happening, she attacks, biting one of the cops. Eventually, everyone moves downstairs when suddenly the body of Fletcher falls from several stories above, he having evidently been attacked and thrown over the balcony.

I’ll round this up quickly. We soon discover that the building has been quarantined by the CDC. It all traces back to the dog of a young girl that, when taken to the vet, showed signs of something like rabies, but a version of the disease that acted much more quickly. Other residents start showing signs, and those who succumb to the disease start attacking. The residents of the building, plus the news crew, cops, and fire fighters, are now trapped inside while the CDC attempts to contain the potential plague and panic. People get whittled down one by one until we are left with just Angela and Scott, who, having retreated to the attic, find some evidence of what has caused all of this to happen.

Were Quarantine an original film, I’d love it, just as I loved [●REC]. The best thing that Quarantine has going for it is that it is incredibly visceral. It feels like something that is really happening, which has always been the strength of the found footage format. It’s smart enough to present a situation that feels like it could actually happen in some sense. After all, we’re talking about a biological plague, and while our infected people behave in zombie-like ways, they’re not technically dead.

The problem is that I’ve already seen this. In many cases, I’ve seen the exact same shot used in the previous film. Again, I don’t always object to a remake. There are times when it makes sense to update a film because of changes in technology or ideas of storytelling, or to bring out different aspects of the original tale. In this case, though, Quarantine is a very straight remake of the original movie, and the original was released a year before this. There’s nothing new here and nothing to update from the first film.

I don’t want to go on a rant here, but I very well may. For as visceral as Quarantine is, and for as nicely as it puts together this scenario of being trapped in a building with something terrible and literally unable to leave because attempting to do so will get you shot, the movie is entirely unnecessary. It’s been done, and it was done the year before, more tightly, and better. If Quarantine hadn’t been made, a few people would have one fewer credit and less money. In terms of cinematic visions and output, nothing else would be different.

I find that frustrating. If you go into this cold and you’re down for found footage and some decent scares, you’ll probably like it. I mean, I like it in the sense that it’s well-made and does exactly what it sets out to do. But it’s disappointing because it held not a single scare for me since I’ve literally been there, done that.

I’d also like to suggest that it’s generally a bad idea to put the last shot of the film on the cover of the DVD slipcase, but what they hell do I know?

Why to watch Quarantine: The best one-word description is “visceral.”
Why not to watch: It’s just [●REC] in English.