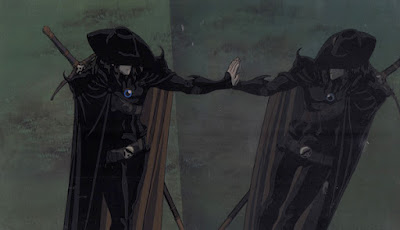 Before I get into the details of Vampire Hunter D: Bloodlust (called by the closest equivalent to that possible in Japanese: Banpaia Hanta Di: Buraddorasuto), I need to talk a little bit about the Japanese language. There’s a stereotype that Japanese and Mandarin speakers can’t get r’s and l’s correct. The truth is that Japanese doesn’t have an English r or l; it has a sound that is essentially the dead middle between them. What this means is that every time someone calls our title character a “dunpeal,” the actual word being referenced is “dhampir,” an Albanian word for a half-human, half-vampire.

The story takes place thousands of years in the future (roughly 12,090 CE) after some sort of cataclysm has great changed the planet. There was a time in the past when vampires were much more common, and the child of a human mother and vampire father, the dunpeal/dhampir D (voiced by Andrew Philpot) of the title were a lot more common. These hybrids have many of the traits of their vampire sire, including a weakness for sunlight (although not a complete weakness to it) and effective immortality. Think Blade, but anime. Our title character (again, think Blade) is a vampire hunter who wants to wipe out the remaining vampires, and does so as a mercenary, hired by people who have dealings with the bloodsuckers.

So, naturally, that’s going to be the case here. Charlotte (Wendee Lee) has been kidnapped by a vampire named Meier Link (John Rafter Lee), and D has been hired to retrieve her. He’s told that he is not the only hunter on the case. A gang called the Marcus Brothers, who have a large assault vehicle and each have their own specialties have been hired to bring Charlotte back as well. Her family naturally wants her alive, but it she’s been turned, they’d prefer her returned dead rather than undead. D sets off to track down Meier and Charlotte, knowing that the Marcus Brothers have a head start on him.

One of the problems I frequently have with anime titles is that I feel like I don’t have the cultural background to truly understand what is going on. There often seems to be a lot of assumptions made about the world in which the story takes place that aren’t explained. I’m just supposed to understand that the world works in a particular way without that world being made understandable, like someone forgot to include all of the exposition. There’s a little bit of that in Vampire Hunter D: Bloodlust. For instance, D has some sort of supernatural parasite (apparently called Left Hand and voiced here by Mike McShane) that sometimes manifests as a face in the middle of D’s, well, left hand. All it would take is a line or two that explains what the hell the face that appears in D’s hand actually is to explain that to me, but that never happens.

Other than that, though, the story is actually pretty straightforward and easy to follow. Both D and the Marcus brothers pursue the fleeing couple, finding along the way that Charlotte was less kidnapped and more abandoned her family because she actually loves Meier Link. D and the Marcus group will have a few run-ins as well. Specifically, D is going to spend a good deal of time dealing with Leila (Pamela Adlon), a woman who lost her parents to vampires and pursues them out of a need for vengeance.

Once you get past the story, anime tends to trade on a couple of things, both of which Vampire Hunter D: Bloodlust does very well. There’s a lot of action here that, in generally, is clearly shown. There are lots of fight sequences rife with projectile weapons, lots of death, and plenty of gooey slaughter. We get a series of strange supernatural creatures for our characters to fight. And, as I said above, outside of the exposition that doesn’t seem to be here at all, like an explanation of the world and the characters (I discovered the year this is supposed to take place in by looking at the Wikipedia article about the Vampire Hunter D novels), the story itself is very straightforward.

Ultimately, I think it’s pretty good. It does make me want to track down the first Vampire Hunter D movie from 1985 if only to see if some of these story elements are more fully explained. I want to find this world interesting and worth exploring, but the conventions of anime seem to work against me in this respect. In fact, one of the reasons I tend to like Miyazaki’s films more than I do other anime films is that Miyazaki, aside from being charming, has worlds that are more fully explained in some way.

But here’s the thing: The characters are cool. The story is pretty good, and has some very interesting twists that run through it. There’s plenty of action, and there are creatures here that aren’t going to appear in anything else. It’s a great exemplar of what is possible in anime, and I absolutely understand why fans of Vampire Hunter D exist. So, I suppose that is the film’s real achievement. It makes me want to like it and want to know more about the world it presents.

Why to watch Vampire Hunter D: Bloodlust: Gorgeous art and some cool ideas.
Why not to watch: Not all of it makes sense.