Ten Days of Terror!: The Witches 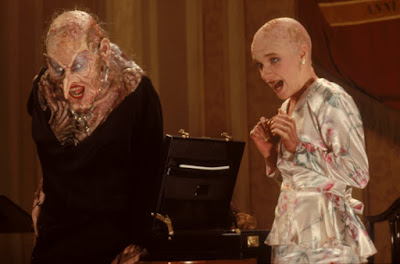 There are a lot of things to talk about with a film like The Witches. It’s such a strange combination of things I really enjoyed and things I genuinely hate in movies. In the plus column, it’s based on a story by Roald Dahl and it stars Anjelica Huston. On the other hand, it has some clear problems for anyone in the audience older than about nine. We’ll get to that, I assure you.

Because this is a Roald Dahl story, there are a few things you can guess going in. The first is that our main character will be a child. The second is that it’s likely that he’ll lose his parents pretty quickly. The third is that most of the adults are going to be evil, stupid, or both. All of this is exactly correct. While many of the adults in this film will be the witches of the title, aside from our main character’s parents (who will be killed off in the first few minutes) and his grandmother, the adults are going to be uniformly awful.

Luke (Jasen Fisher) is told tales of witches by his grandmother (Mai Zetterling). When his parents are killed in a car accident, custody of Luke goes to his grandmother, who is infirm because she is diabetic. She prescribed a trip to the coast for some recuperation, so the pair head off for a little vacation. Sadly for them, the resort they go to is also holding an annual convention of all of the witches in England, a convention that will be attended by the world’s Grand High Witch, Eva Ernst (Anjelica Huston).

In this world, witches are not merely evil but are specifically evil when it comes to children. Witches, in Dahl’s world, hate children and want nothing more than to kill them with magic. Luke, playing in the hotel, overhears a meeting of all of the witches and learns of the Grand High Witch’s evil plan. She’s going to give all of the witches money to purchase candy stores around the country. Then, once they reopen the stores, they will sell chocolate laced with a secret formula to children around the country. This formula will, over the course of a couple of hours, turn the children into mice. She demonstrates this on a young hotel guest named Bruno (Charlie Potter). Of course, Luke is also captured and also turned into a mouse.

So, now in a tiny rodent form, Luke has to get back to his grandmother, figure out a way to reverse his condition, and get back at the witches.

The biggest problem I have with The Witches is that literally everyone in the film is kids’ movie stupid at all times. They make stupid decisions at every opportunity, notice nothing even when it is right in front of them, and overreact to everything that happens. The best example of this is Bruno, whose lone character trait is that he’s always hungry. He gets turned into a mouse, but doesn’t think it’s a problem. When Luke’s grandmother tries to enlist the support of his parents, his mother does nothing but scream at the mouse, and neither of his parents seem to notice that there is a mouse literally talking to them. Bruno is unphased by his father trying to hit him and his mother screaming. In fact, the only reason Bruno is trying to help Luke at all is because Luke has promised him that his grandmother has peanuts back in her hotel room.

The real reason to see this, though, is the rather wonderful prosthetic and puppetry work.

Why to watch The Witches: The puppet work is pretty spectacular.
Why not to watch: Every character is completely stupid.