Films: The Exorcism of Emily Rose
Format: DVD from Cortland Public Library on The New Portable. 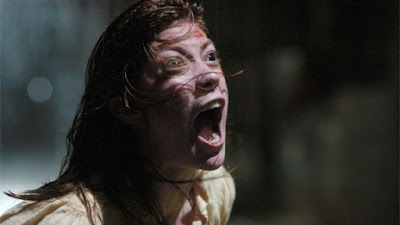 Possession movies are nothing new. The Exorcist is the granddaddy of the subgenre and most of the other movies that have followed it have been a reaction to it in one way or another. Some (Beyond the Door comes to mind) are a direct knock-off while others (Possession) are reactions to the original film in that they attempt to be something completely different. The Exorcism of Emily Rose is a little of both. The story and the scenes of the actual exorcism are reminiscent of William Peter Blatty’s story, but the film itself is a courtroom drama more than it is anything else.

This is also the second day in a row where I am completely gobsmacked by at least a part of our cast list. The Exorcism of Emily Rose is clearly a horror film. Two of the starring roles are handled by renowned actors. Laura Linney plays our defense attorney; when this film was released, she had collected an Oscar nomination, netted a second one from this same year and has pulled a third since. The priest she is defending is played by Tom Wilkinson in the year in the middle of his two Oscar nominations. The film also features Shohreh Aghdashloo, who also has an Oscar nomination. For an exorcism film, that’s pretty exceptional.

As I said, this is a courtroom drama, which means we’re starting with a crime potentially having been committed. That crime is the death of Emily Rose (Jennifer Carpenter) and the killer is the family priest, Father Moore (Wilkinson). Actually, “killer” is the wrong phrase; Moore is charged with negligent homicide. His claim is that Emily was truly possessed and that the exorcism simply failed. This is a story that is corroborated by her family, particularly her father, Jason (Joshua Close). The prosecution, knowing that they are going after a priest, decide to put Ethan Thomas (Campbell Scott), a devout Methodist, in charge of the case.

The defense is headed by Erin Bruner (Linney), an up-and-coming lawyer who has just won a major case for her firm. Since the firm has been hired by the archdiocese and Bruner’s fame is on the rise, they want her to handle the case. What they most assuredly do not want is Father Moore on the witness stand, since they believe that this may ultimately embarrass the church. Her demand is that, if she wins the case, to be made a partner.

Naturally, a great deal of the story is going to be told in flashback. While we will get a great deal of the testimony in the courtroom, much of what we see will be Emily’s reactions to what happened to her. The film very much wants us to believe that Emily Rose’s possession was the real thing. What we see from her perspective very much seems to be the sort of thing we expect from a movie character being possessed. We see people’s faces become demonic, for instance. We also see things from the perspective of Father Moore and his own dealings with what he sees as her possession.

The film is also smart enough to not limit us to the supernatural explanation. When Emily begins to speak in Latin, we learn that this was a language she studied at one point. The same is true for German, and there is even likely exposure to Aramaic, which she also speaks at one point. In fact, everything that happens to her and everything that we see she and everyone else experiences can be chalked up to entirely mundane causes. It’s one of the strengths of the film that it doesn’t simply present us with the idea that it simply must be supernatural.

There’s a great deal to like in The Exorcism of Emily Rose, not the least of which being the stellar casting. It is, however, the truly committed performance from Jennifer Carpenter that makes the film worth seeing. Carpenter evidently saved the production company a great deal of money because of her ability to contort her body in a variety of ways. These contortions look unnatural, and they help sell the more supernatural interpretation of the possession story. It’s not merely her physical abilities that make the performance work. She is fully committed in every possible respect.

For what it is, The Exorcism of Emily Rose is pretty good. The performances are worth seeing, and the story itself is really well-written. These days, though, it becomes increasingly more difficult for me to take seriously the Catholic Church as the good guys. Even without all of the massive scandals in Catholicism today, I’d have trouble with the piety and idea of actual demons. In that respect, every exorcism-based film loses me a little bit. It’s hard to be terrified of something in which you genuinely don’t believe. Because of that, any plot that relies even in part on the idea of demonic possession is going to fail with me.

Still, I’m more impressed with this than I thought I would be, especially considering its lackluster reputation. It’s smarter and better than you’ve been led to believe.

Why to watch The Exorcism of Emily Rose: Jennifer Carpenter’s committed performance
Why not to watch: These days, it’s hard to see the Catholic Church as the good guys.

Posted by SJHoneywell at 2:49 PM