I'm so Glad We Had this Time Together 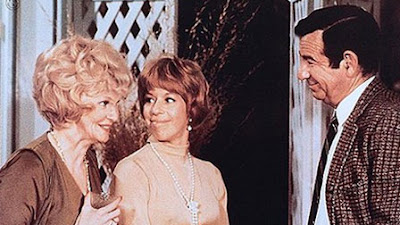 If you were a kid in the 1970s in the U.S., you probably watched The Carol Burnett Show. If you didn’t, you should have; Burnett was a genius comedienne and her show had some of the greatest comedy moments in television history. Google “Carol Burnett elephant” or “Went with the Wind” and enjoy. Seriously, there’s a moment in the elephant sketch where no one can speak for almost a minute because of what’s going on on the stage. The show had a top-notch cast and so much of it holds up today. Burnett is mostly known for her television work, so it was interesting to see Pete ‘n’ Tillie, a movie that is more than a comedy and in which she plays a romantic lead.

Pete ‘n’ Tillie, as you might well expect, is a story about a romantic couple named, well, Pete (Walter Matthau) and Tillie (Burnett). When the film starts, Tillie is a mid-30s virgin on the verge of becoming a spinster. She’s set up on a blind date with Pete by her friend Gertrude (Geraldine Page, who was nominated in a supporting role). The two clearly don’t hit it off, and despite this, they keep seeing each other. This is despite the fact that Pete is something of a misogynist and also a womanizer, evidenced by the fact that Tillie finds hairpins that she doesn’t use in his bed. Despite all of this and despite the fact that he’s very much a slimy creep, when he gets a promotion, the two of them are married.

You’d think that what follows might well be the story of Pete’s continuing affairs and Tillie’s reaction. If that were the case, she’d more or less have one of three in the standard playbook. One, she’d have an affair of her own. Two, she’d become indignant and ruin the man who ruined her. Three, she’d become resigned to her fate. This would give us, in order, a romance, a comedy, and a tragedy. It’s kind of the third option until we get to what the film really wants to do to us.

See, Pete and Tillie have a son named Robbie (Lee Montgomery). When Robbie is nine, he is diagnosed with what is presumably cancer. We’re not really told, but in a quiet discussion between Pete and the doctor, the words “malignancy” and “remission” come out. A good chunk of the next part of the film concerns their personal reactions. Tillie becomes something of a realist while Pete tries to shield the boy from reality. These events destroy both Tillie’s religious faith and the marriage, leading to the third act.

There are moments of comedy here and moments of terrible tragedy. This is one of those movies that tries to hit every emotion it can during its running time, and I think it gets most of them. It’s caused me to think a couple of things here.

The first is that Carol Burnett is extremely talented. I get that her first love is comedy and it should be because she is an absolute treasure as a comedian, but she could pull off drama as well. Seeing her in this was not unlike seeing Mary Tyler Moore in Ordinary People, although not that extreme. Burnett is a damn fine actress when she wanted to be, although nothing will ever replace her comedy.

The second thing is that I have real problems understanding characters like Pete. I mean, I understand that they exist, but I genuinely don’t understand the draw. He is really unappealing in almost every aspect of his character. He’s openly sexist, pandering, and not shy about his sexual conquests. His jokes tend to be demeaning and while sometimes self-effacing, are almost always derogatory to the person with whom he is speaking.

What this means is that in terms of the film, this is a tragedy that works and a romance that absolutely doesn’t. It may well be that the tragedy works as well as it does because the romance doesn’t make any sense. I realize that things were different in the 1970s, and an unmarried woman was somehow suspect in certain things, but to saddle Tillie with a complete creep like Pete demeans and belittles her.

This is a very difficult film to find, and honestly, I’m okay with that. I didn’t hate this movie, but it’s not one I plan on watching again any time soon. If I’m going to watch Carol Burnett, I’d much rather have her in the company of Tim Conway, Vicky Lawrence, and Harvey Korman. That’s how I love her and that’s how I want to remember her in her prime.

Why to watch Pete ‘n’ Tillie: How often do you get to see Carol Burnett act?
Why not to watch: There may not be a more hateful Walter Matthau character in existence.