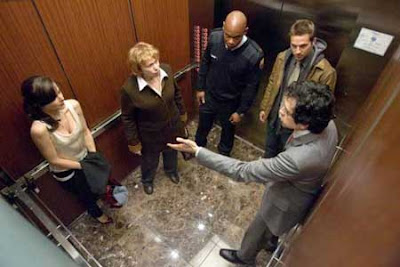 Long, deep, lingering sigh. I’d love to go off on a long rant about the films of M. Night Shyamalan here, and there’s certainly plenty of material. I can’t forgive the guy for absolutely ruining The Last Airbender, producing one of the worst movies I’ve ever seen from some of the best source material ever created. No, no, the temptation is strong here, but I will resist. Instead, I went into Devil with as much of an open mind as I could, hoping against hope that I wouldn’t end up once again dubbing its director “M. Night Shame-about-your-last-film” (and thank you Mark Kermode for that name). To be fair, though, he didn’t actually direct this or even write the screenplay. He did, however, write the story on which the movie is based.

Devil is a high concept film. Five people are trapped in an elevator, and we soon figure out that all five of them are actually terrible people who clearly deserve some form of divine punishment. Fortunately for us, one of those five people in the elevator also happens to be the literal devil incarnate (hence the title of the film), who stops the elevator, causes all sorts of technical problems, and starts killing off the elevator occupants one by one.

The thing to remember about Shyamalan’s stories is that, on the surface, coincidence plays a huge part in the events that follow. In truth, in Shyamalan’s films, it’s not about coincidence, but about some sort of divine plan. Everything happens for a reason, and all of those apparent coincidences are simply the workings of one higher power or another conspiring to make events happen the way they do. Signs is probably the most egregious of his films (that I’ve seen) to follow this path, but it’s undeniable that it’s also a major part of the plot of Devil.

Our elevator occupants are a shady businessman (Geoffrey Arend), an old kleptomaniac (Jenny O’Hara), a young gold digger (Bojana Novakovic), a security guard with a violent past (Bokeem Woodbine), and an ex-marine drifter (Logan Marshall-Green). Detective Bowden (Chris Messina), called to the area to investigate a potential suicide, is called in when things in the elevator start getting hairy. We learn that Detective Bowden’s family was killed by a hit-and-run driver five years previous. Since this is a Shyamalan screenplay, it should come as no surprise that one of the five elevator occupants is responsible for the death of his family.

The story that frames the movie comes from Ramirez (Jacob Vargas), who also works as a security guard in the building with the deadly elevator. Ramirez tells us in voiceover as the film opens that sometimes the devil comes to Earth to torment the damned before taking them with him. When he does that, it always starts with a suicide and the devil claims his victims in the sight of other people. More and more of this mythology comes to light as the film progresses, and because that is the story that we have happening here, all of the elements of the tale Ramirez spins are going to be accurate as well. Of course they are.

What we have, then, is a case where we are given an interesting premise that is not really carried out in a satisfactory way. The idea of the devil coming to Earth and tormenting souls before claiming them is actually a tried-and-true storyline, and one that can probably be made to work in infinitely entertaining ways. There are tons of entertaining movies that have a literal Satan in human form walking around and causing mischief. I don’t really care that it’s derivative in that respect. And this comes from people who have some talent. Director John Erick Dowdle also created the acclaimed The Poughkeepsie Tapes and the well-received As Above, So Below. Screenwriter Brian Nelson wrote Hard Candy. So where does this thing go off the rails?

I’m not sure. This is really an Agatha Christie story, specifically “And Then There Were None” reduced to five people in an elevator with the added bonus that one of those people is Satan incarnate. It might be the elevator that’s the problem. In shooting for something meant to be claustrophobic, it ends up just being a little silly. I mean, eventually we’re going to get to a point where there’s only one possible killer, right? And if all of the people in the elevator deserve to die, then we’re going to end up with an obvious killer, right?

To push the metaphysics further, we get a situation that is pretty much untenable in any version of Christianity that I know of. By making himself obviously known as a supernatural force, the devil in Devil more or less offers proof that a god exists, which has some serious implications on most people’s ideas of faith. Metaphysically, the film is a mess.

And therein lies the problem. It is, in fact, the elevator that makes the film not work. Done as a more supernatural-fueled version of Agatha Christie’s story, we’d have a much better film that lives up to its solid, if a bit trite, premise. Instead, we get something that, even with normal suspension of disbelief, is still filled with a whole hell of a lot of holes.

I wanted to like it. I found that I can’t quite.

Why to watch Devil: M. Night Shyamalan has certainly had his name attached to worse films.
Why not to watch: It doesn’t fulfill an interesting premise.