Ten Days of Terror!: I Bury the Living 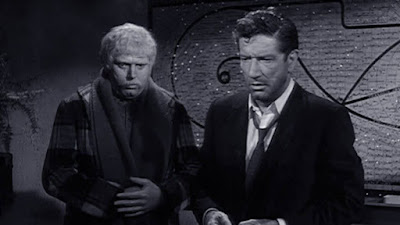 With a name like I Bury the Living, I wasn’t entirely sure what to expect. It’s a great, lurid title from 1958, the sort of thing that feels like a cheap horror movie that will feature cheap thrills of a dubious nature designed to shock audiences of Eisenhower’s America. Even if the film turned out to be nothing special, the title alone would make it noteworthy.

It’s a bit of a mixed bag, honestly. On the one hand, it’s not a film that really lives up to what is implied by its title. Based on those four words, this seems like it should be a movie where a crazed maniac captures people and inters them until he (it’s always a he) is finally captured by the police and his final victim, probably the love interest of the stalwart detective, is rescued at the last minute. This couldn’t be further from the truth. The reality is that the film is far better than what that lurid title would suggest. It has the feel of one of the hour-long Twilight Zone episodes, and with its running time of 77 minutes, even the length feels right for that comparison.

Bob Kraft (Richard Boone) owns and runs a department store and has been recently appointed to be the caretaker of the local cemetery. He doesn’t really want the job, but is told by his uncle George (Howard Smith) that everyone takes the job for a year. Bob heads out to the cemetery where he meets Andy (Theodore Bikel), the man who has been tending the grounds for 40 years. Bob wants Andy to retire with a decent pension, something that Andy isn’t quite keen to do. While there, Bob encounters a newly married young couple who are required to purchase cemetery plots as a part of the man’s inheritance; he doesn’t get the money until he purchases grave plots for him and his new wife.

This is where the plot starts up. The office of the cemetery is dominated by a huge map of the grounds with each of the plots marked out. Filled plots are marked with a black pin while purchased plots still waiting for their occupants are labeled with white pins. Bob makes a careless mistake with the young couple—he inserts black pins instead of white ones in their new plots. And later that day, they turn up dead. He does the same thing with an old man in town, and again, the same thing happens. A black pin goes into the map early, and reality seems to shift itself to conform to the map.

Of course, the pattern continues, and Bob is suddenly convinced that he has the power of life and death over the people in the area because of the cemetery map and the colored pins. Three more deaths (including Uncle George) put Bob through a very dark night of the soul, convinced that if he puts black pins and it causes death, perhaps if he replaces those recently placed black pins with white ones if the dead might not come back to life. ,p> What I like about I Bury the Living is that it goes for exactly what a true horror movie should. There’s no gore here, no ghouls that need to be explained away. There is instead a very interesting premise that is handled with good, solid scripting and performances. There are little subtleties that work through the entire film. As Bob Kraft becomes more and more obsessed with the cemetery map and his own perceived power over life and death, the map becomes larger. His obsession, sense of terrible power, and fears about what might be reality grow along with the map, or rather the map grows along with them until it takes over the entire wall of the cemetery office.

Certainly there was the possibility of making this a straight up B-movie filled with walking undead or something similar. That, or the obvious thought of a gravedigger literally burying living people is expected here—and what is literally shown on the various movie posters and DVD covers I have found. That we instead get something that is psychological and disturbing on another level is quite a treat.

Sure, I Bury the Living conforms in many ways to the specific tropes of the day. Bob Kraft has a girlfriend/fiancée (Peggy Maurer) who doesn’t figure into the plot at all and seems to be there because she needs to be to tick the “main character has a love interest” box. The closing five minutes or so end up being a little too pat for the story that is happening and don’t work as well as they could.

Still, there’s a lot here to like. I Bury the Living takes some real chances and presents a story much better and much smarter than the title would indicate. I expected something as gory and horrific as the 1950s would allow. Instead, I got something really entertaining and a lot deeper and richer than I thought I would. That’s always a nice surprise.

Why to watch I Bury the Living: It’s so much better than its eye-catching title.
Why not to watch: The ending is too pat.