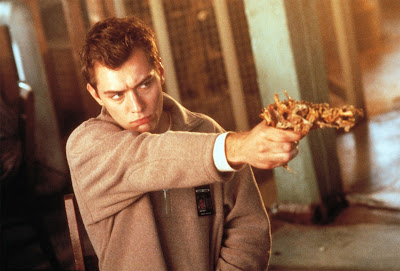 I don’t remember when eXistenZ first came out, but I remember hearing about it. I worked in the video game industry, after all, and eXistenZ exists more or less in a video game world. It also exists in David Cronenberg’s movie world of body horror, so there’s that, too. I remember being interested in it but then not really having anything to do with it as it didn’t seem to be that well received. I’ve seen it before now, but I figured it was time to get back to it. The truth is that I liked it less on the rewatch than I did on my initial viewing, which is always a little disappointing.

I’m not going to get too involved in the plot here and am instead going to just give the basics. eXistenZ involves the first public test of a new virtual reality game system called eXistenZ, created by a legendary designer named Allegra Gellar (Jennifer Jason Leigh). The game is played with flesh-colored controllers that pulse and seem to be alive and literally connect into the user’s nervous system, which is right in line with Cronenberg’s oeuvre. Shortly into the demo, a man in the crowd stands up and fires biological weapon at Geller, wounding her. She is suddenly on the run with new-to-the-industry PR flack Ted Pikul (Jude Law), who has never played any of the new games and has not been fitted with a biological port to use the controllers. Now, Geller needs to make sure that her game has not been compromised and the two are forced to explore the game world of her creation to discover what is really happening and who is after her.

So, there’s a lot going on, and there’s going to be a great deal of Cronenberg’s signature gooey things, innards, and grue. The film is really an exploration on the concept of reality and virtual reality. Inside the eXistenZ game, both Allegra and Ted go into another game with different controllers, leading us to something that, a decade before anyone knew what it was, feels like the plot of Inception. There’s also a great deal of Videodrome here with the idea of technology and humanity blending on some level and not to the benefit of humanity.

But there are real problems here, and virtually all of those problems stem not from Cronenberg’s base idea but from how he has decided to present that idea. It seems that, at least at this point in his career, he simply can’t get away from squishy, nasty things at every opportunity. In fact, the plot seems to serve as a way for him to increase the amount of nasty things rather than having the nasty bits serve as a way to move the plot along. I don’t think it’s any coincidence that Cronenberg took a few years off and not too long after that started making films like A History of Violence and Eastern Promises that veer far away from surreal horror.

That’s the main issue I have with eXistenZ; everything seems to be not in service of the story or the characters, but in service of the squeamish stuff. Cronenberg isn’t really a gore director. He goes for the gross-out frequently enough, but it’s not really about blood and guts and eyeballs. It’s more about the sort of things you find when you turn over a rock. Cronenberg’s grotesque elements are not so much about being physically nasty, but about inducing a kind of squeamishness. Slippery, slimy things, squelchy noises, and smashed bugs are more in line with what he does. One gets the impression that a lot of things in his film worlds smell not quite rotten, but foul and unclean.

I don’t have a problem with that. I love a lot of his films like Dead Ringers and The Fly, and his squeamish-reaction-inducing moments are what makes him who he is. The problem is that they simply don’t fit with the ideas he wants to bring about in eXistenZ. There are big ideas here, and ideas that are worth discussing, but they get lost in the near constant desire to show us biological pistols made of bone and gristle that shoot teeth into their victims, or nervous systems wrenched from mutant lizards used to make flesh-colored game controllers. In attempting to serve up the lowest common denominator, Cronenberg loses sight of what should be the main point of the movie.

There are still some big ideas here, particularly on the nature of reality and on the potential for media to present us with worlds that are indistinguishable from that reality. These are ideas and concerns that need to be addressed and need to be calmly and rationally discussed. A movie isn’t a bad place to start that conversation, but the movie that does so needs to be smarter than punctuating its points with splayed lizard guts and squishy sound effects at every opportunity.

Why to watch eXistenZ: It is the natural direction for David Cronenberg’s body horror
Why not to watch: While it has big ideas, it doesn’t really use them that well.