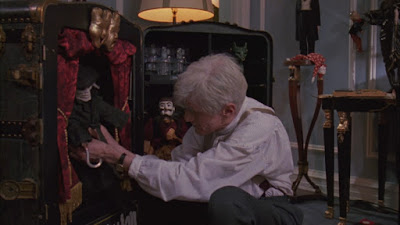 There’s certainly no lack of examples of the idea that dolls and children’s toys can be decidedly creepy when shown that way. Child’s Play cemented that idea, but there are certainly plenty of other examples. Puppetmaster (also called Puppet Master depending on where you find it) is perhaps a bit tangential to that concept. I mean, the killers in this film are puppets (without strings), but none of them would be mistaken as toys.

So let’s dive right in. Alchemist Andre Toulon (William Hickey) has discovered a way to bring his puppet creations to life. Despite his being in Bodega Bay, California, he is about to be accosted by Nazis. He decides to hide his living puppets in a case behind a false wall in his hotel room, and before the Nazis show up to confront him, he kills himself.

We doodley-doodley-doop to the film’s present day where a quartet of psychics of one stripe or another are contacted by a colleague named Neil Gallagher (Jimmie F. Skaggs). Sideshow psychic Dana (Irene Miracle) is a legitimate fortune teller and can locate missing objects. Yale professor Alex (Paul Le Mat) is a precognitive dreamer. Carissa (Kathryn O’Reilly) can sense the history of objects, and is investigating a sort of sexual past history of things with partner Frank (Matt Roe). And it turns out two things have happened that give them all pause. The first is that Neil Gallagher has gotten married to a woman named Megan (Robin Frates). The second is that Neil has killed himself.

Of course we’re going to get all sorts of craziness to follow. You knew that going in, which is why you’re reading about a movie that features killer puppets. Puppet Master managed a number of sequels, many of which had different puppets than the ones presented here. For this film, our puppets are:

Blade: A black-cloaked puppet who has a knife for one hand and a hook for the other;
Pinhead: A larger puppet who has human-sized fists, but a tiny little head;
Leech Woman: The only female puppet, who has the ability to vomit out blood sucking leeches;
Jester: A puppet who can rotate different parts of his face and doesn’t seem to have any other skills or functions; and
Tunneler: A puppet with a large drill bit attached to the top of his head.

If you know the series, you know there are other puppets, like Six-Shooter who show up eventually. I’m not sure how those are worked into the Puppetmaster mythology. Since Andre Toulon puts a genie-like puppet and a Chinese puppet in the case in the opening sequence and they don’t show up in the rest of the film, I’m really not sure what is happening or where the others came from. Only Jester and Blade show up in the opening, so I have no idea how the others got there or where they were hiding.

Here’s the thing—you should know going in that there’s not going to be a huge reason to recommend this movie on its basic merits, right? There’s not going to be a compelling reason to watch a movie where a group of psychics are pursued and murdered by a gang of killer Pinocchios. It’s honestly about as good as it can be, given the premise, although there are a few suggestions I’d like to make.

The first suggestion is that the puppets aren’t in the movie nearly enough. Seriously, they are the reason that anyone is going to watch this, and they show up only toward the end, and only for a few minutes. I get why that can be effective sometimes, but for a low-budget movie like this one that is about goofy scares, the puppets should be front and center. There’s far too much dealing with the stupid personalities of the psychics, particularly the two who decide to have sex whenever and wherever they can. I suppose this was supposed to be prurient, but it’s not really.

And once we have the puppets, we don’t really have any reason for them to act the way they do. We’re given something like the idea that Neil has somehow taken over control of them, but we’re not given any reason how that happened, since at the start of the film, they appear to be free-willed creatures. Are they still? Are they under his control? We don’t know. We just know that it doesn’t make sense.

Finally, as much as I like the concept of the Leech Woman, she’s ultimately not that threatening. How many leeches would she have to pump out to actually kill someone with leeches? She’s about as threatening as Jester, who doesn’t have a weapon or the ability to hurt anyone.

Ultimately, it’s not as good as Dolls, and Dolls isn’t that good. But it is fun, and for that, it’s worth seeing.

Why to watch Puppetmaster: Killer puppets!
Why not to watch: Despite the number of sequels this spawned, it’s not as good as its precursor, Dolls.