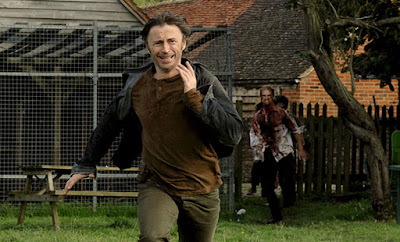 I’m always prepared, at least a little, to be disappointed in a sequel. I first saw 28 Weeks Later in the theater the weekend of its release. I had very high hopes for it, even knowing that there was little chance it could match the first film, which remains one of my favorite films ever. But, as I say, I had hopes. Ten minutes in, and I was fully prepared for this to be the template for how to make a sequel. Thirty minutes later, and I was ready to throw up my hands in frustration and disappointment.

It’s strange, because this film has generally received positive reviews. Rotten Tomatoes, IMDB, and Letterboxd all rate the film relatively favorably, and for the life of me, I can’t understand why. 28 Weeks Later is a film that requires everyone in it to be collectively stupid all the time. The film wants particular things to happen and the screenwriters, rather than giving us legitimate, character-driven reasons for things to happen instead make the characters follow the plot arc that they want. This means that frequently our characters are going to act in very stupid ways, often in ways that defy logic and protocol, so that we can have a new wave of rage-infected people.

We start somewhere in England where Don (Robert Carlyle) and his wife Alice (Catherine McCormack) are hiding in a barricaded house with a few other survivors. Sitting down to dinner one night, they hear a frantic pounding on the door. A young boy, pursued by infected, asks to be rescued. They pull him in, and, a few minutes later, the infected show up and manage to get inside. Chaos ensues, and Don is separated from Alice and the boy. Rather than helping his wife, Don runs off, gets into a boat, and leaves, seeing his wife dragged away by the infected. This section of the film—the calm that drops furiously into visceral terror, is as good as anything from 28 Days Later.

As the name of the movie would suggest, we now jump forward 28 weeks. The infection has died off because the infected don’t eat. Now, months after the event, there are still dangers in the area, but the infection has died out and the process of repopulation Britain has begun under the auspices of primarily the American military. A central area of London has been cleared for habitation and about 15,000 people have been repatriated. Among those are Don’s and Alice’s children, Tammy (Imogen Poots) and Andy (Mackintosh Muggleton), the first children to be brought back to the country.

Why them? Because it turns out that Don is now a bigwig at the military base as the guy who keeps things running. The kids get settled in, and that night, Andy tells his sister that he doesn’t want to forget what their mother looks like. So, the next day, the kids escape the quarantine and go out into the still-dangerous portions of London to the house they used to live in. There they find their mother, still alive and evidently uninfected. Everyone is brought back to the base where we discover that Alice is somehow immune to the infection (it’s implied that this is because of her heterochromia), but that she is definitely a carrier. While we discover this, Don slips into the containment area where Alice is being kept and reconciles with her. When he kisses her, the inevitable happens—the virus is carried through bodily fluids like saliva, and within a few seconds, Don is infected, Alice is dead, and we’ve got a good 40 minutes of mayhem to come.

All of that sounds good, right? So what’s my problem with it? Well…

There are a lot of problems here. In fact, there are so many problems that I don’t buy the story as it happens at all. Let’s start with the kids coming in to be repatriated. I can almost buy this, but it seems very odd that they’re the only kids on the island. It’s not like they’re in the first group of children brought back to the island; they’re the only children being brought back. Like I said, I can almost buy this. If we presume that Don has the sort of power he claims, he could probably pull a few strings.

Next, let’s discuss the problem with the kids leaving the containment area. Sure, kids are going to do stupid things, but they’ve been back for a single day and had it drilled into them that the area outside of the quarantine is significantly dangerous with rampant diseases, rats, and packs of wild, feral dogs. The kids sneak out (great security) and are spotted by a soldier named Doyle (Jeremy Renner) who calls them in, but does nothing else. He can’t fire a warning shot? They can’t get someone mobilized immediately? The kids are spotted immediately, and they take a good deal of time looking for a vehicle and no one shows up. Then, just as they find their mother, the troops show up on cue. We’re told that no one knows where the kids are, and then there are suddenly dozens of troops at exactly the right place.

Now we need to talk about Don. I can accept that Don has some sort of pull or an important job at the base, but does it strike only me as strange that the American military would give a British national complete access to literally every place on a military base? When Alice is brought to the base and put in quarantine, does it make any sense that a woman who is potentially infected is left completely unattended?

Once Don is infected, he shows up everywhere. It’s as if the only way we know that the infected are still following our main characters is to show us the one person we as the audience know is infected at every opportunity. Don seems to specifically be tracking his children rather than going after literally thousands of other potential victims, and that simply doesn’t track with how the plague works based on the first film.

I so wanted this to work, but I didn’t like it on the first viewing and I didn’t like it on this viewing, either. For the plot to work the way it does, 28 Weeks Later requires not that everyone make bad decisions but that everyone possible makes the worst possible decisions in every case. It’s driven by the desired plot rather than making sure that the plot happens based on understandable decisions of the characters, and for that, it fails completely.

And that’s depressing, because the films wastes a stellar cast that includes Idris Elba, Harold Perrineau, and Rose Byrne. If these problems could have been handled in a way that made sense, everything else—the political commentary, the moments of terror, the panic—would all work completely.

Why to watch 28 Weeks Later: The opening 10 minutes are as good as the original film.
Why not to watch: It requires that everyone in the film has had an aneurysm.