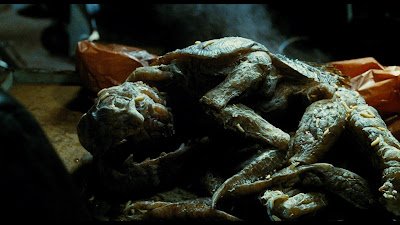 How do you deal with the worst film of an acclaimed director? That’s exactly what I’m faced with when approaching Mimic. I love the work of Guillermo del Toro pretty much out of hand. Even his flawed movies are interesting and worth seeing. It’s my opinion that Mimic is the most flawed of his movies, so flawed in fact that he disowned the film after it was released since he felt that his own work was so constantly changed and affected by the demands of the producers.

Mimic starts with a fatal plague that has struck New York killing hundreds of children. Because this is a movie, deputy director of the CDC, Dr. Peter Mann (Jeremy Northam) recruits Dr, Susan Tyler (Mira Sorvino), an entomologist to help. Dr. Tyler, using the magic of genetic manipulation, creates a new species of large insect she dubs the Judas. This new breed secretes an enzyme that accelerates the metabolism of cockroaches, which are the carriers of the plague. With their metabolism ramped up, the roaches starve to death no matter how fast they ingest food. Soon, the roach population of New York is virtually non-existent, the plague is gone, and everyone is happy. Since the roaches were bred essentially sterile, no one is concerned about what might happen to them.

Flash forward three years, and if you’ve guessed that the Judas bugs have pulled a Jurassic Park to prove that life finds a way, well, you’ve seen a movie at some point in your life. A couple of kids show up to Dr. Tyler’s lab with a new, gigantic insect. She investigates it and discovers that it is some form of mutated Judas, which she takes to her former professor (F. Murray Abraham). He more or less gives her the “life finds a way” speech, and she and her now-husband Dr. Mann go a-hunting in the subway for the bugs, assisted by his assistant Josh (Josh Brolin). We’re also going to get some help from a transit cop (Charles Dutton) and a shoe shine man named Manny (Giancarlo Gianini), whose autistic son Chuy (Alexander Goodwin) has disappeared.

So what’s going on? The Judas has survived and, because it has the same accelerated metabolism of the cockroaches it destroyed, it procreates at an accelerated rate. What we’re told is that it has gone through something like 40,000 generations in the three years since it was released. And this is where I mentally check out. Why? Because math, that’s why. That many generations in three years works out to more than 36 generations per day, and that’s even with the benefit of having one of those years be a leap year, something like an entirely new generation every 39 minutes.

Deep sigh. Those mutations, incidentally, have created massive changes in the Judas insect. We learn that this is a collective insect like termites or ants, with a colony and different types of creatures having different roles. The most dangerous ones, the warrior caste, are not only human sized, but have, thanks to evolution, managed to look something like human beings. And again, I mentally throw my hands in the air. Evolution can do things like this, but it requires some sort of selection pressure. Living in a subway and not encountering human beings is the opposite of selection pressure needed to create this kind of genetic change.

Anyway, everybody gets trapped below the city in the subway tunnels looking for the colony and hoping to track down the lone male of the species, since, without the male, the entire colony will die. That’s what we’re told, of course. What we’ve seen happen, though, is that an allegedly infertile species has suddenly become viable. One might think, since this happens with creatures all along the tree of life, that perhaps a surviving bug might metamorphose into a male, but hey, we’ve already pitched logic and science out the window, so who cares about that?

Mimic is a film that has not improved on a rewatch. The problems with it are pretty much entirely wrapped up in the screenplay, though, and the fact that it completely misrepresents anything in terms of actual science and pulls me completely out of the film. Everything else about it works pretty well. The performances are fine, and the creature effects are actually quite good and, as happens often with del Toro, gooey. They do spend too much time underground, though. The film becomes pretty static for much of the second and into the third act. At least it feels that way.

The truth is that Mimic doesn’t really work very well, although it tries. It wants to be scary and claustrophobic. Instead, it’s just sort of icky by virtue of being populated with giant bugs and forcing people to cover themselves in insect scent gland juice to avoid being attacked. Ultimately, the ending is too pat, and the threat never seems very real.

I like Guillermo del Toro as a director, but it’s obvious to me why he disowned this film. A director capable of Pan’s Labyrinth, the visual splendor of Crimson Peak and the charm of Hellboy should do a lot better than this.

Why to watch Mimic: Guillermo del Toro doesn’t generally make bad movies.
Why not to watch: There’s a reason he disowned it.