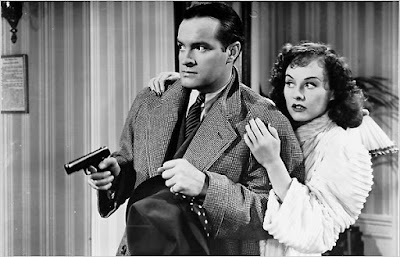 Bob Hope had a persona when it came to his film career. Typically, Hope played cowards who got thrown into dangerous situations and got out of them becomes of someone else’s work or dumb luck. In The Ghost Breakers, Hope plays someone who spends a lot of the movie scared, but manages to act bravely despite this. It’s a bit of a change. Unfortunately, not much else changes from Hope’s basic persona of cracking one-liners that frequently fall flat.

The Ghost Breakers is only marginally a horror movie, and the part that would be considered horror fare for its time doesn’t happen until the third act of the film. Up to that point, it’s a bit of a screwball comedy with some mob stuff thrown in. We start with two different stories. The first involves Mary Carter (Paulette Goddard), who has just inherited an allegedly haunted castle on a small island just off the coast of Cuba. Several people, including Parada (Paul Lukas) and Francisco Mederos (Anthony Quinn) attempt to warn her away from the castle, and Parada even offers to buy it for $50,000 (close to $900,000) while she’s still in New York.

The second story involves the imaginatively named Lawrence L. Lawrence (Bob Hope), a radio announcer who specializes in telling seedy tales of the underworld learned from his informant Raspy Kelly (Tom Dugan). After he tells his latest story about mobster Frenchy Duval (Paul Fix), Larry is summoned to Frenchy’s hotel room so that Frenchy can “set him straight.” This bodes ill for Larry, and he goes up to the room armed with the gun of Alex (Willie Best), his associate/assistant/Jack-of-all-trades. Naturally, Frenchy’s room is on the same floor as Mary’s, and a gunfight ensues unrelated to Larry’s visit. He panics, though, and fires off the gun. When he sees a man die, he assumes that he shot him, and he winds up in Mary’s room to hide.

Ultimately, the only place in Mary’s room for him is in her steamer trunk, which has been packed for her pending trip to Cuba and her new castle. Through a series of events, Larry winds up staying in the trunk until the ship sails, so now he and Alex are off to Cuba with Mary, who is starting to get death threats. Parada is along for the ride, as is Geoff Montgomery (Richard Carlson), a man who Mary met a few weeks previous and who lives in Cuba. We also met Ramon Mederos (also Anthony Quinn), the twin brother of Francisco, who turns out to have been the man shot back at the hotel.

We don’t get to the actual ghosts until we finally get to Cuba and even then, we get Havana night life until Larry and Alex steal a rowboat and head for the island. There are ghosts and a few other creatures that show up until, in the last few minutes, we figure out everything that’s going on. There are a lot of loose ends, though, or at least a lot of characters and events who pop up at times and seem like they might be important, but of which nothing is made.

For instance, we’re told of an old caretaker (Virginia Brissac) who lives on the island with her zombie son (Noble Johnson). We get a scene or two of the old woman, but nothing ever really comes of her. We also get some action from the zombie—he even attacks Larry and Alex, but the reason for this is never fully explained, and the ultimate fate of the zombie is left hanging. He gets shoved into a room, and for all we know, when the film ends, he’s still there trying to get out.

The Ghost Breakers feels like a film that was designed to be about 10-15 minutes longer than it actually is, since there are so many odd red herrings and unexplained moments in the final cut. For instance, Lloyd Corrigan shows up as an unnamed character multiple times during the ship ride to Cuba, and he interacts specifically with Mary. And then he vanishes from the film, not appearing at all in the third act. So much is left unexplained that if The Ghost Breakers had billed itself as a mystery, it would instantly be a failure because there is no way anyone watching would have been able to piece anything together accurately to have a hope of figuring out what is going on before it is revealed.

A bigger issue is that The Ghost Breakers has a lot of jokes that come at the expense of anyone who isn’t white. The Cubans, even those prominent in the cast, are somehow lesser people by virtue of being Cuban, and Larry’s assistant Alex is the butt of a good amount of racial humor. I suppose I can say in the film’s defense that it isn’t so blatantly racist as some other films of the era (The Palm Beach Story comes to mind), but it’s still very much a part of the tenor of the film. Willie Best has a thankless role here, which is a shame because in many ways, aside from Goddard, he’s the best thing in the film.

The Ghost Breakers is a racist-y template for an episode of Scooby-Doo. I say that realizing that that phrasing actually makes it sound a little better than it actually is. Paulette Goddard is as charming as she ever is, and I give Hollywood credit for giving us a romantic pairing where our two principles are at least within a decade of each other in age, which seems a rarity. Still, the scares are few and far between and the humor tends to fall flat. Add in the inherent racism, and there’s not a lot here to recommend.

Why to watch The Ghost Breakers: Paulette Goddard is always a joy.
Why not to watch: It’s slow to start and filled with racism.